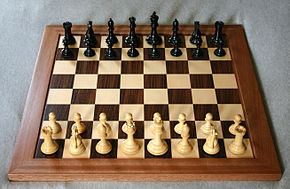 Starting position of a game of chess

The following outline is provided as an overview of and topical guide to chess:

Chess - two-player board game played on a chessboard (a square-checkered board with 64 squares arranged in an eight-by-eight grid). In a chess game, each player begins with sixteen pieces: one king, one queen, two rooks, two knights, two bishops, and eight pawns. The object of the game is to checkmate the opponent's king, whereby the king is under immediate attack (in "check") and there is no way to remove or defend it from attack.

Chess can be described as all of the following:

Rules of chess - rules governing the play of the game of chess.

How each piece moves

Competition rules and other features

Chess tactics - a chess tactic is a move or sequence of moves which may result in tangible gain or limits the opponent's options. Tactics are usually contrasted with strategy, in which advantages take longer to be realized, and the opponent is less constrained in responding.

Checkmate pattern - a particular checkmate. Some checkmate patterns occur sufficiently frequently, or are otherwise of such interest to scholars, that they have acquired specific names in chess commentary. Here are some of the most notorious:

Possible responses to an attack

Chess strategy - aspect of chess playing concerned with evaluation of chess positions and setting of goals and long-term plans for future play. While evaluating a position strategically, a player must take into account such factors as the relative value of the pieces on the board, pawn structure, king safety, position of pieces, and control of key squares and groups of squares (e.g. diagonals, open files, individual squares).

School of chess - group of players that share common ideas about the strategy of the game. There have been several schools in the history of modern chess. Today there is less dependence on schools - players draw on many sources and play according to their personal style.

Chess opening - group of initial moves of a chess game. Recognized sequences of opening moves are referred to as openings as finished by White or defenses, as finished by Black, but opening is also used as the general term.

Openings including a trap

Venues (who and where to play)

History of chess, by period

Chess variant - games similar to chess but with different rules or pieces.

Variants with a different starting position

Variants with a different board

Variants with incomplete information and elements of chance

Chess combined with other sports and pastimes