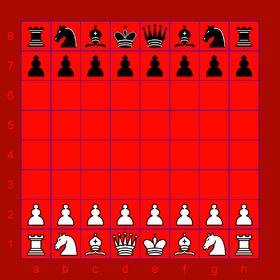 Senterej starting position. Each king is to the right of its ferz (represented by queen).

Senterej (Amharic ሰንጠረዥ sänṭäräž or Ethiopian chess) is a regional chess variant, the form of chess traditionally played in Ethiopia. It is the last popular survival of shatranj. Senterej creates variable initial chess positions, which render the memorization of chess opening lines impracticable.

The board is not checkered, merely marked into squares; it is usually a red cloth, marked by strips of black or blue.

In Senterej both sides start playing at the same time without waiting for turns. The phase before first capture is called the "mobilization" or "marshalling" phase, or werera. Both players may move their pieces as many times as they like without concern for the number of moves the opponent makes. During this phase the players watch each other's moves, and retract their own and substitute others as they think best. They only start to take turns after the first capture.

The play was much more sociable than Europe is used to, with all the bystanders (even, in the old days, slaves) calling out their notions of useful plays and moving the pieces about to demonstrate.

The rules and customs surrounding checkmate are numerous. Dealing the fatal blow with a rook or knight was considered inartistic. Delivering the fatal stroke with a ferz or fil is more respectable; with a combination of pawns, even more praiseworthy. A king denuded of all pieces cannot be mated. A king with only a single piece supporting him (pawns do not count, in this case or the previous one) can only be mated before that piece has moved seven times.