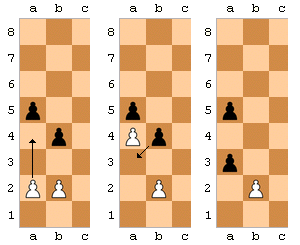 En passant (from French: in passing) is a move in chess. It is a special pawn capture, that can only occur immediately after a pawn moves two ranks forward from its starting position and an enemy pawn could have captured it had the pawn moved only one square forward. Note that the capturing pawn must be on its fifth rank prior to executing this maneuver. The opponent captures the just-moved pawn "as it passes" through the first square. The resulting position is the same as if the pawn had moved only one square forward and the enemy pawn had captured it normally.

The en passant capture rule was added in the 15th century when the rule that gave pawns an initial double-step move was introduced. It prevents a pawn from using the two-square advance to pass an adjacent enemy pawn without the risk of being captured.

A pawn on its fifth rank may capture an enemy pawn on an adjacent file that has moved two squares in a single move, as if the pawn had moved only one square. The conditions are:

En passant is the only occasion in chess in which the capturing piece does not replace the captured piece on its square.

There are some examples of en passant in chess openings. In this line from Petrov's Defence, White can capture the pawn on d5 en passant on his sixth move.

Another example occurs in the French Defense after 1.e4 e6 2.e5, a move once advocated by Wilhelm Steinitz. If Black responds with 2...d5, White can capture the pawn en passant with 3.exd6. Likewise, White can answer 2...f5 with 3.exf6e.p.

An example is from this game by Steinitz and Bernhard Fleissig.

Black has just moved his pawn from f7 to f5 in this game between Gunnar Gundersen and Albert H. Faul. White could capture the f-pawn en passant with his e-pawn, but instead played:

The largest known number of en passant captures in one game is three, shared by three games; in none of them were all three captures by the same player. The earliest known example is a 1980 game between Alexandru Sorin Segal and Karl Heinz Podzielny.

En passant captures have often been used as a theme in chess compositions, as they "produce striking effects in the opening and closing of lines". In the 1938 composition by Kenneth S. Howard, the key move 1. d4 introduces the threat of 2.d5+ cxd5 3.Bxd5#. Black may capture the d4-pawn en passant in either of two ways:

An example showing the effect en passant captures have on pins is this 1902 composition by Sommerfeldt:

Allowing the en passant capture, together with the introduction of the two-square first move for pawns, was one of the last major rule changes in European chess, and occurred between 1200 and 1600. Other relatively recent rule changes were castling, the unlimited range for queens and bishops (Spanish master Ruy López de Segura gives the rule in his 1561 book Libro de la invencion liberal y arte del juego del axedrez.,) and a change to the rules on pawn promotion. In most places the en passant rule was adopted at the same time as allowing the pawn to move two squares on its first move, but it was not universally accepted until the Italian rules were changed in 1880.

The motivation for en passant was to prevent the newly added two-square first move for pawns from allowing a pawn to evade capture by an enemy pawn. Asian chess variants, because of their separation from European chess prior to that period, do not feature any of these moves.

In either algebraic or descriptive chess notation, en passant captures are sometimes denoted by "e.p." or similar, but such notation is not required. In algebraic notation, the capturing move is written as if the captured pawn advanced only one square, for example, bxa3 (or bxa3e.p.) in this example.

The possibility of an en passant capture is relevant to claims of a draw by threefold repetition. Two positions whose pieces are all on the same squares, with the same player to move, are for this purpose considered different if there was an opportunity to make an en passant capture in the first position, and of course that opportunity no longer exists the second time the same configuration of pieces occurs.