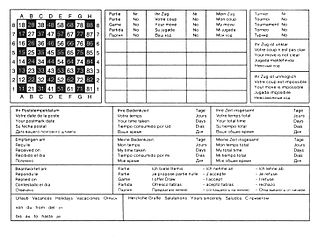 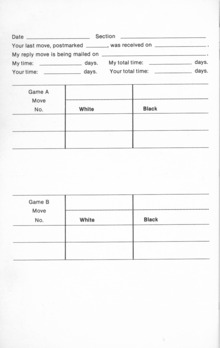 Card used by the US Chess Federation

Correspondence chess differs from over-the-board (OTB) play in several respects. While players in OTB chess generally play one at a time (an exception being a simultaneous exhibition), correspondence players often have several games going at once. Tournament games are played concurrently, and some players may have more than one hundred games continuing at the same time.

Time limits in correspondence play are usually between 30 and 60 days for every 10 moves (plus transmission time in postal chess). This time allows for far deeper calculation, meaning that blunders can be less frequent. Certain forms of assistance, including books, chess databases and sometimes chess programs, are often allowed. Books and databases are almost universally acceptable, but organizations vary as to whether chess engine use is permitted.

The new phenomenon of computer assistance has altered the essence of correspondence chess and in addition to profound chess knowledge and analytical discipline, the ability to interpret and guide computer analysis has become important. Given that even players with poor chess knowledge can use the strongest computer programs to analyse their games, the gap between the beginner and master player has narrowed in recent years. However, the influence of computer assistance remains controversial in both official and casual play, and consensus on the issue of whether to allow computer aid is still lacking.

Correspondence chess tournaments are usually played under the auspices of an official regulatory body, most importantly International Correspondence Chess Federation (ICCF), which is affiliated with FIDE, the international chess organization. However, the ICCF, which organizes postal and email events, is not the only organization involved in correspondence chess. There are numerous national and regional bodies for postal chess, as well as a number of organisations devoted to organize email play for free such as the International Email Chess Group (IECG), the Free Internet Correspondence Games Server (FICGS), that also runs a world championship cycle, and International E-mail Chess Club (IECC). However, groups other than the ICCF are not sanctioned by FIDE.

The ICCF awards the titles International Master, Senior International Master and International Correspondence Chess Grandmaster - these are equivalent to similar titles awarded by FIDE for over-the-board chess. The ICCF also runs the World Correspondence Chess Championships. Because these events can last a long time, they may overlap: for instance, in February 2005 Joop van Oosterom was declared winner of the eighteenth Championship (which began in June 2003), though the winner of the seventeenth Championship (which began in March 2002) had not yet been determined.

In recent years, the use of increasingly powerful chess programs has brought forth new challenges for organizations like the ICCF and the U.S. Chess Federation, necessitating sometimes controversial decisions on the admissibility of such programs in official correspondence play.

Correspondence chess servers are usually database-driven and carry with them a web-based interface for submitting moves to the database. But they do create the possibility of facilitating any method of transmission, as long as the transmitted moves are audited within the server's database.

Server fees vary. Most casual servers use a yearly charging model, whereby players can play as many tournaments or games as they want all year round. Some servers offer basic membership for free, with more services available for a fee. Also more casual servers allow the use of nicknames, and have a real-time rating system which often adjusts a player's rating after each rated game. Casual servers also tend to have a wide range of facilities, such as online games databases, social and chess improvement forums, teams, and player homepages. More traditionally based correspondence chess servers often charge per tournament and still force the use of real names, which some claim raises privacy implications.

With the advent of smart-phones such as Apple's iPhone, Blackberry and Android based devices correspondence chess has seen a recent rise in popularity as applications on these devices. Usually the devices use Wifi, GPRS, 3G and sometimes SMS technology to submit their moves to a central server.

There are organizations devoted to organizing play by email, such as the International E-mail Chess Club (IECC).

Email play has gradually declined in popularity due to issues such as email viruses, opponents' claims of not receiving moves, and similar impediments to the point email play has arguably been superseded by server-based correspondence chess, where usually the interface to a chess server is a web-based interface.

There are national and regional organizations for postal chess which use traditional "snail mail" for transmitting moves between players. The ICCF and affiliated local and national federations often organize postal events. Other examples of groups offering postal play include the Correspondence Chess League of America (CCLA) and the United States Chess Federation (USCF). However, groups other than the ICCF and affiliates are not sanctioned by FIDE.

One of the older documented postal correspondence chess games is a game played in 1804 by lieutenant-colonel F.W. von Mauvillon of the Dutch army in The Hague with one of his officers in Breda.,

Although nowadays the strongest correspondence players are specialists, a number of notable players in over-the-board (OTB) chess have in the past played postal games during their chess career.