In most modern poker games, the first round of betting begins with one or more of the players making some form of a forced bet (the blind and/or ante). In standard poker, each player bets according to the rank he believes his hand is worth as compared to the other players. The action then proceeds clockwise as each player in turn must either match, or "call", the maximum previous bet or fold, losing the amount bet so far and all further interest in the hand. A player who matches a bet may also "raise", or increase the bet. The betting round ends when all players have either matched the last bet or folded. If all but one player folds on any round, the remaining player collects the pot without being required to reveal their hand. If more than one player remains in contention after the final betting round, the hands are revealed, and the player with the winning hand takes the pot.

With the exception of initial forced bets, money is only placed into the pot voluntarily by a player who either believes the bet has positive expected value or who is trying to bluff other players for various strategic reasons. Thus, while the outcome of any particular hand significantly involves chance, the long-run expectations of the players are determined by their actions chosen on the basis of probability, psychology, and game theory.

Poker has gained in popularity since the beginning of the twentieth century and has gone from being primarily a recreational activity confined to small groups of enthusiasts to a widely popular activity, both for participants and spectators, including online, with many professional players and multimillion-dollar tournament prizes.

English actor Joseph Cowell reported in his memoirs that the game was played in New Orleans, Louisiana in 1829, with a deck of 20 cards, and four players betting on which player's hand was the most valuable. Jonathan H. Green's book, An Exposure of the Arts and Miseries of Gambling (G. B. Zieber, Philadelphia, 1843), described the spread of the game from there to the rest of the country by Mississippi riverboats, on which gambling was a common pastime. As it spread north along the Mississippi River and to the West during the gold rush, it is thought to have become a part of the frontier pioneer ethos.

Soon after this spread, the full 52-card French deck was used and the flush was introduced. The draw was added prior to 1850 (when it was first mentioned in print in a handbook of games). During the American Civil War, many additions were made including stud poker (specifically five-card stud) and the straight. Further American developments followed, such as the wild card (around 1875), lowball and split-pot poker (around 1900), and community card poker games (around 1925).

Modern tournament play became popular in American casinos after the World Series of Poker (WSOP) began in 1970. Among the champions from these early WSOP tournaments were Johnny Moss, Amarillo Slim, Bobby Baldwin, Doyle Brunson, and Puggy Pearson. Later in the 1970s, the first serious poker strategy books appeared, including Super/System by Doyle Brunson and Caro's Book of Poker Tells by Mike Caro , followed later by The Theory of Poker by David Sklansky. By the 1980s, poker was being depicted in popular culture as a commonplace recreational activity. For example, it was featured in at least 10 episodes of Star Trek: The Next Generation as a weekly event of the senior staff of the fictional ship's crew. In the 1990s, poker and casino gambling began to expand across the United States.

Poker's popularity experienced an unprecedented spike at the beginning of the 21st century, largely because of the introduction of online poker and hole-card cameras, which turned the game into a spectator sport. Not only could viewers now follow the action and drama of the game on television, but they could also play the game in the comfort of their own homes. In the 2003 World Series of Poker, accountant Chris Moneymaker, who had never played professional poker, won the main event. He won his seat into the $10,000 tournament via a $40 multi-table satellite and turned his $40 into $2.5 million. This helped popularize the game further, which became known as the "Moneymaker effect".

Following the surge in popularity, new poker tours soon emerged, including the World Poker Tour and European Poker Tour, both televised, and the latter sponsored by online poker company PokerStars. Subsequent tours have since been created by PokerStars, such as Latin American Poker Tour and Asia Pacific Poker Tour, as well as other national tours.

In 2009 the International Federation of Poker was founded in Lausanne, Switzerland, becoming the official governing body for poker and promoting the game as a mind sport. In 2011 it announced plans for two new events: The Nations Cup, a duplicate poker team event, to be staged on the London Eye on the banks of the River Thames and “The Table”, the invitation-only IFP World Championship, featuring roughly 130 of the world’s best poker players, in an event to find the 2011 official "World Champion".

Four of a kind

In casual play, the right to deal a hand typically rotates among the players and is marked by a token called a dealer button (or buck). In a casino, a house dealer handles the cards for each hand, but the button (typically a white plastic disk) is rotated clockwise among the players to indicate a nominal dealer to determine the order of betting. The cards are dealt clockwise around the poker table, one at a time.

One or more players are usually required to make forced bets, usually either an ante or a blind bet (sometimes both). The dealer shuffles the cards, the player on the chair to his right cuts, and the dealer deals the appropriate number of cards to the players one at a time, beginning with the player to his left. Cards may be dealt either face-up or face-down, depending on the variant of poker being played. After the initial deal, the first of what may be several betting rounds begins. Between rounds, the players' hands develop in some way, often by being dealt additional cards or replacing cards previously dealt. At the end of each round, all bets are gathered into the central pot.

At any time during a betting round, if one player bets, no opponents choose to call (match) the bet, and all opponents instead fold, the hand ends immediately, the bettor is awarded the pot, no cards are required to be shown, and the next hand begins. This is what makes bluffing possible. Bluffing is a primary feature of poker, one that distinguishes it from other vying games and from other games that make use of poker hand rankings.

At the end of the last betting round, if more than one player remains, there is a showdown, in which the players reveal their previously hidden cards and evaluate their hands. The player with the best hand according to the poker variant being played wins the pot. A poker hand comprises five cards; in variants where a player has more than five cards available to them, only the best five-card combination counts. 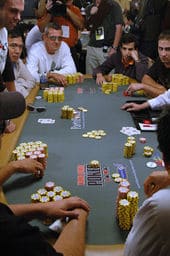 Poker has many variations, all following a similar pattern of play and generally using the same hand ranking hierarchy. There are four main families of variants, largely grouped by the protocol of card-dealing and betting:

Straight
A complete hand is dealt to each player, and players bet in one round, with raising and re-raising allowed. This is the oldest poker family; the root of the game as now played was a game known as Primero, which evolved into the game three-card brag, a very popular gentleman's game around the time of the American Revolutionary War and still enjoyed in the U.K. today. Straight hands of five cards are sometimes used as a final showdown, but poker is almost always played in a more complex form to allow for additional strategy.
Stud poker
Cards are dealt in a prearranged combination of face-down and face-up rounds, or streets, with a round of betting following each. This is the next-oldest family; as poker progressed from three to five-card hands, they were often dealt one card at a time, either face-down or face-up, with a betting round between each. The most popular stud variant today, seven-card stud, deals two extra cards to each player (three face-down, four face-up) from which they must make the best possible 5-card hand.
Draw poker
A complete hand is dealt to each player, face-down, and after betting, players are allowed to attempt to change their hand (with the object of improving it) by discarding unwanted cards and being dealt new ones. Five-card draw is the most famous variation in this family.
Community card poker
Also known as "flop poker", community card poker is a variation of stud poker. Players are dealt an incomplete hand of face-down cards, and then a number of face-up community cards are dealt to the center of the table, each of which can be used by one or more of the players to make a 5-card hand. Texas hold 'em and Omaha are two well-known variants of the community card family.

Other games that use poker hand rankings may likewise be referred to as poker. Video poker is a single-player video game that functions much like a slot machine; most video poker machines play draw poker, where the player bets, a hand is dealt, and the player can discard and replace cards. Payout is dependent on the hand resulting after the draw and the player's initial bet.

Strip poker is a traditional poker variation where players remove clothing when they lose bets. Since it depends only on the basic mechanic of betting in rounds, strip poker can be played with any form of poker; however, it is usually based on simple variants with few betting rounds, like five card draw.

Another game with the poker name, but with a vastly different mode of play, is called Acey-Deucey or Red Dog poker. This game is more similar to Blackjack in its layout and betting; each player bets against the house, and then is dealt two cards. For the player to win, the third card dealt (after an opportunity to raise the bet) must have a value in-between the first two. Payout is based on the odds that this is possible, based on the difference in values of the first two cards. Other poker-like games played at casinos against the house include three card poker and pai gow poker.

In a January 2015 article published in Science, a group of researchers mostly from the University of Alberta announced that they "essentially weakly solved" heads-up limit Texas hold 'em with their development of their Cepheus poker bot. The authors claimed that Cepheus, in 1000 games, would lose at most 1 big blind on average against its worst-case opponent, a strategy that is so "close to optimal" that "it can't be beaten with statistical significance within a lifetime of human poker playing".

Less autonomous poker programs exist whose primary purpose is not to play poker by themselves, but is instead to calculate the odds of certain hand outcomes. For example, one might input a hand which contains three 7s and two unrelated low cards, the program in question would then return that holding just the 7s results in a 10.37% chance of an improved hand being drawn.