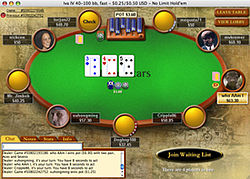 PokerStars, is the largest online poker cardroom in the world.

A PokerStars.com online satellite tournament produced the 2003 World Series of Poker (WSOP) champion, Chris Moneymaker. As the first person to become a world champion by qualifying at an online poker site, Moneymaker's 2003 win was an important factor in catalyzing the poker boom of the mid-2000s. The press has called this the "Moneymaker Effect."

On July 31, 2012, PokerStars bought its former competitor, Full Tilt Poker. The $731 million deal settled a civil lawsuit with the Department of Justice while giving ownership of Full Tilt Poker's assets to PokerStars.

PokerStars launched its beta play-money-only site on September 11, 2001. The company began offering real money wagering on December 12, 2001. PokerStars was originally a Costa Rican company, Rational Enterprises, which was majority owned by the Israeli Scheinberg family. The company was subsequently moved to the Isle of Man, a British Crown dependency. The move was driven by the establishment of a 0% corporate tax rate and the removal of rules barring companies from accepting casino and poker bets from the United States of America. PokerStars holds its licence with the Isle of Man Gambling Supervision Commission and also holds government licences in Denmark, France, Belgium, Italy, Estonia and Spain. On February 10, 2012, PokerStars acquired a European Union license granted by the Malta Lotteries and Gaming Commission.

While privately owned, PokerStars had been the subject of financial media speculation regarding a possible initial public offering or merger with a publicly listed company. Analysts estimated its market value would have been approximately $2 billion (US) in 2006, which would have made the company one of the world's largest privately held gambling companies. PokerStars overtook PartyPoker as the world's largest online poker room at after the U.S. Congress passed the Unlawful Internet Gambling Enforcement Act of 2006. Many sites, including PartyPoker, immediately suspended business with U.S. gamblers, while others, including PokerStars, did not.

On December 27, 2009, PokerStars set the world record for the biggest online tournament. The tournament entry fee was $1, and the number of entrants reached 149,196. They broke that record on December 4, 2011, when 200,000 players played in a $1 buy-in tournament with a first prize of $50,000. PokerStars was so busy during the early stages of the tournament, all tournaments had to be stopped for 20 minutes because the heavy traffic crashed their servers. This record had been broken again at June 16, 2013, with 225,000 participants. The Buy-In was $1 and went completely into the prizepool, with no rake.

PokerStars launched a beta of Zoom Poker in March 2012, with an official launch in May 2012. Zoom Poker is a fast fold ring game poker format where opponents change after every hand. The aim of Zoom poker is to offer players more hands of poker than in a regular ring game. In January 2013 PokerStars rolled out Zoom Poker Tournaments due to popular demand for the fast fold variant

Spring Championship of Online Poker (SCOOP) was established in 2009 and has since become the most popular online tournament series. Unlike WCOOP, there are three different buy-in stakes in the SCOOP events: Low, Medium (10x Low stake) and High (100x Low stake).

Micro Millions was launched in March 2012 as a tournament series designed for recreational and micro-stakes players offering a low buy-in tournament schedule and large guaranteed cash prizes. PokerStars guaranteed $5 million in prize pools for the second installment of MicroMillions.

PokerStars also sponsors the PokerStars Caribbean Adventure (PCA). Since it started in 2004 the PCA has grown into the biggest poker event outside of Las Vegas.

Pokerstars.net is a company website offering free play but no real money games.

PokerStars.tv is the online source for PokerStars TV shows, commercials and event highlight shows - with commentary and expert analysis available in up to 7 languages. The content available includes live cards-up coverage of the biggest PokerStars tournaments, TV shows such as The Million Dollar Challenge and PokerStars Big Game and online tournament highlights from WCOOP and SCOOP.

PokerStars.com and PokerStars.eu operate worldwide under licenses from the Isle of Man and Malta governments, respectively. PokerStars also operates under separate government licenses in Denmark, France, Italy, Belgium, Spain and Estonia. In October 2008, PokerStars launched PokerStars.it, exclusively for Italian players, which offers real money tournaments in euros in addition to the usual play money games. PokerStars offers some ring games and tournaments on its main PokerStars.com site in euros. In March 2010, the site began allowing users to keep their real-money accounts in British pounds and Canadian dollars as well as U.S. dollars and euros. 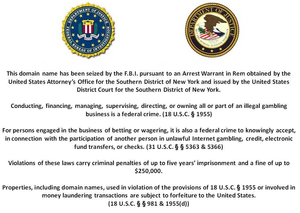 United States Department of Justice website seizure noticeOnline poker was suspended on April 15 at the top three United States websites (In order, PokerStars, Full Tilt Poker and Cereus Poker Network) and continues to be suspended at the top two.

On April 15, 2011, the Department of Justice seized the .com internet addresses of the three online gambling sites, a total of five URLs: Pokerstars.com, Fulltiltpoker.com, Absolutepoker.com, Ultimatebet.com and UB.com.

On April 15, 2011, the U.S. Attorney's Office for the Southern District of New York seized and shut down Pokerstars.com and several of its competitors' sites, alleging that the sites were violating federal bank fraud and money laundering laws. On April 20, 2011, the U.S. Attorney's office returned control of the Pokerstars.com domain name to the company in order "to facilitate the withdrawal of U.S. players’ funds held in account with the companies."

On July 10, 2012, PokerStars, asserting the Government had insufficient grounds on which to base the charges, filed motions to dismiss the charges against them.