The game of poker was developed some time during the early 19th century. Since those early beginnings, poker has grown to become an extremely popular pastime throughout the world.

In the 1937 edition of Foster's Complete Hoyle, R. F. Foster wrote: "the game of poker, as first played in the United States, five cards to each player from a twenty-card pack, is undoubtedly the Persian game of As-Nas." By the 1990s some gaming historians including David Parlett started to challenge the notion that poker is a direct derivative of As-Nas. There is evidence that a game called poque, a French game similar to poker, was played around the region where poker is said to have originated. The name of the game likely descended from the Irish Poca (Pron. Pokah) ('Pocket') or even the French poque, which descended from the German pochen ('to brag as a bluff' lit. 'to knock'). Yet it is not clear whether the origins of poker itself lie with the games bearing those names. It is commonly regarded as sharing ancestry with the Renaissance game of primero and the French brelan. The English game brag (earlier bragg) clearly descended from brelan and incorporated bluffing (though the concept was known in other games by that time). It is quite possible that all of these earlier games influenced the development of poker as it exists now.

A modern school of thought rejects these ancestries, as they focus on the card play in poker, which is trivial and could have been derived from any number of games or made up on general cardplay principles. The unique features of poker have to do with the betting, and do not appear in any known older game. In this view poker originated much later, in the early or mid-18th century, and spread throughout the Mississippi River region by 1800. It was played in a variety of forms, with 52 cards, and included both straight poker and stud. 20 card poker was a variant for two players (it is a common English practice to reduce the deck in card games when there are fewer players). The development of poker is linked to the historical movement that also saw the invention of commercial gambling.

English actor Joseph Crowell reported that the game was played in New Orleans in 1829, with a deck of 20 cards, and four players betting on which player's hand was the most valuable. Jonathan H. Green's book, An Exposure of the Arts and Miseries of Gambling (G. B. Zieber, Philadelphia, 1843), described the spread of the game from there to the rest of the country by Mississippi riverboats, on which gambling was a common pastime. As it spread north along the Mississippi River and to the West during the gold rush, it is thought to have become a part of the frontier pioneer ethos.

Soon after this spread, the full 52-card English deck was used and the flush was introduced. The draw was added prior to 1850 (when it was first mentioned in print in a handbook of games). During the American Civil War, many additions were made including stud poker (the five-card variant), and the straight. Further American developments followed, such as the wild card (around 1875), lowball and split-pot poker (around 1900), and community card poker games (around 1925). 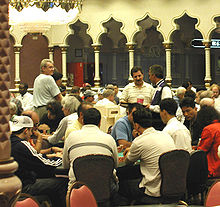 Developments in the 1970s led to poker becoming far more popular than it was before. Modern tournament play became popular in American casinos after the World Series of Poker began, in 1970. Notable champions from these early WSOP tournaments include Johnny Moss, Amarillo Slim, Bobby Baldwin, Doyle Brunson, and Puggy Pearson. Later in the 1970s, the first serious poker strategy books appeared, notably Super/System by Doyle Brunson (ISBN 1-58042-081-8) and Caro's Book of Poker Tells by Mike Caro (ISBN 0-89746-100-2), followed later by The Theory of Poker by David Sklansky (ISBN 1-880685-00-0).

By the 1980s, poker was being depicted in popular culture as a commonplace recreational activity. For example, it was featured in at least 10 episodes of Star Trek: The Next Generation as a weekly event of the senior staff of the fictional ship's crew.

Poker's popularity experienced an unprecedented spike at the beginning of the 21st century, largely because of the introduction of online poker and hole-card cameras, which turned the game into a spectator sport. Not only could viewers now follow the action and drama of the game on television, they could also play the game in the comfort of their own home. Broadcasts of poker tournaments such as the World Series of Poker and World Poker Tour brought in huge audiences for cable and satellite TV distributors. Because of the increased coverage of poker events, poker pros became celebrities, with poker fans all over the world entering into tournaments for the chance to compete with them. Television coverage also added an important new dimension to the poker professional's game, as any given hand could now be aired later, revealing information not only to the other players at the table, but to anyone who cared to view the broadcast.

Beginning in 2003, major poker tournament fields grew dramatically, in part because of the growing popularity of online satellite-qualifier tournaments where the prize is an entry into a major tournament. The 2003 and 2004 World Series of Poker champions, Chris Moneymaker and Greg Raymer, respectively, won their seats to the main event by winning online satellites. After the passage of the UIGEA in October 2006, attendance at live tournaments as well as participation in live and online cash games initially slowed; however, they are still growing and far more popular today than they were before 2003. The growth and popularity of poker can be seen in the WSOP which had a record 7,319 entrants to the 2010 main event.

The only nations in Europe that prohibit live poker are Norway, Poland and Albania, according to Dagbladet in 2011.