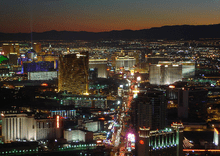 In modern English, a casino is a facility which houses and accommodates certain types of gambling activities. The industry that deals in casinos is called the gaming industry. Casinos are most commonly built near or combined with hotels, restaurants, retail shopping, cruise ships or other tourist attractions. There is much debate over whether or not the social and economic consequences of casino gambling outweigh the initial revenue that may be generated. In the United States, some states that have high unemployment and budget deficits have turned to legalizing casinos, often in places that are not tourist destinations. Some casinos are also known for hosting live entertainment events, such as stand-up comedy, concerts, and sporting events.

The term "casino" is a confusing linguistic false friend for translators.

Casino is of Italian origin; the root casa (house) originally meant a small country villa, summerhouse, or social club. During the 19th century, the term casino came to include other public buildings where pleasurable activities took place; such edifices were usually built on the grounds of a larger Italian villa or palazzo, and were used to host civic town functions, including dancing, gambling, music listening, and sports; examples in Italy include Villa Farnese and Villa Giulia, and in the US the Newport Casino in Newport, Rhode Island. In modern-day Italian, the term casino designates a bordello (also called casa chiusa, literally "closed house"), while the gambling house is spelled casinò with an accent.

Not all casinos were used for gaming. The Catalina Casino, a famous landmark overlooking Avalon Harbor on Santa Catalina Island, California, has never been used for traditional games of chance, which were already outlawed in California by the time it was built. The Copenhagen Casino was a theatre, known for the mass public meetings often held in its hall during the 1848 Revolution, which made Denmark a constitutional monarchy. Until 1937, it was a well-known Danish theatre. The Hanko Casino in Hanko, Finland - one of that town's most conspicuous landmarks - was never used for gambling. Rather, it was a banquet hall for the Russian nobility which frequented this spa resort in the late 19th century and is now used as a restaurant.

In military and non-military usage in German and Spanish, a casino or kasino is an officers' mess. In Italian - the source-language of the word - a casino is either a brothel, a mess, or a noisy environment, while a gaming house is called a casinò.

The precise origin of gambling is unknown. It is generally believed that gambling in some form or another has been seen in almost every society in history. From the Ancient Greeks and Romans to Napoleon's France and Elizabethan England, much of history is filled with stories of entertainment based on games of chance.

The first known European gambling house, not called a casino although meeting the modern definition, was the Ridotto, established in Venice, Italy in 1638 by the Great Council of Venice to provide controlled gambling during the carnival season. It was closed in 1770 as the city government felt it was impoverishing the local gentry.

In American history, early gambling establishments were known as saloons. The creation and importance of saloons was greatly influenced by four major cities: New Orleans, St. Louis, Chicago and San Francisco. It was in the saloons that travelers could find people to talk to, drink with, and often gamble with. During the early 20th century in America, gambling became outlawed and banned by state legislation and social reformers of the time. However, in 1931, gambling was legalized throughout the state of Nevada. America's first legalized casinos were set up in those places. In 1978 New Jersey allowed gambling in Atlantic City, now America's second largest gambling city.

Most jurisdictions worldwide have a minimum gambling age (16 to 21 years of age in most countries which permit the operation of casinos).

Customers gamble by playing games of chance, in some cases with an element of skill, such as craps, roulette, baccarat, blackjack, and video poker. Most games played have mathematically determined odds that ensure the house has at all times an overall advantage over the players. This can be expressed more precisely by the notion of expected value, which is uniformly negative (from the player's perspective). This advantage is called the house edge. In games such as poker where players play against each other, the house takes a commission called the rake. Casinos sometimes give out complimentary items or comps to gamblers.

Payout is the percentage of funds ("winnings") returned to players.

Casinos in the United States say that a player staking money won from the casino is playing with the house's money.

Video Lottery Machines (slot machines) have become one of the most popular form of gambling in casinos. As of 2011 investigative reports have started calling into question whether the modern-day slot-machine is addictive.

Casino design - regarded as a psychological exercise - is an intricate process that involves optimising floor plan, décor and atmospherics to encourage consumer gambling.

Factors influencing consumer gambling tendencies include sound, odour and lighting. Natasha Dow Schüll, an anthropologist at the Massachusetts Institute of Technology, highlights the audio directors at Silicon Gaming’s decision to make its slot machines resonate in, “the universally pleasant tone of C, sampling existing casino soundscapes to create a sound that would please but not clash”.

Dr Alan Hirsch, founder of the Smell & Taste Treatment and Research Foundation in Chicago, studied the impact of certain scents on gamblers, discerning that a pleasant albeit unidentifiable odour released by Las Vegas slots machines generated approximately 50% more in daily revenue. He suggested that the scent acted as an aphrodisiac, facilitating a more aggressive form of gambling.

Casino designer Roger Thomas is credited with implementing a successful, disruptive design for the Las Vegas Wynn Resorts’ casinos in 2008. He broke casino design convention by introducing natural sunlight and flora to appeal to a female demographic. Thomas inserted skylights and antique clocks, defying the commonplace notion that a casino should be a timeless space.

The following lists major casino markets in the world with casino revenue of over $1 billion USD as published in PricewaterhouseCoopers's report on the outlook for the global casino market:

According to Bloomberg, accumulated revenue of biggest casino operator companies worldwide amounted almost 55 billion US dollars as per 2011. SJM Holdings ltd. was the leading company in this field and earned 9.7 billion in 2011, followed by Las Vegas Sands Corp. (7.4 bn). The third biggest casino operator company (based on revenue) was Caesars Entertainment with revenue of 6.2 bn US dollar.

While there are casinos in many places, a few places have become well-known specifically for gambling. Perhaps the place almost defined by its casino is Monte Carlo, but other places are known as gambling centers.

Monte Carlo has a famous casino popular with well-off visitors and is a tourist attraction in its own right. A song and a film named The Man Who Broke the Bank at Monte Carlo need no explanation - they clearly refer to the casino.

Monte Carlo's Casino has also been depicted in many books including Ben Mezrich's Busting Vegas, where a group of Massachusetts Institute of Technology students beat the casino out of nearly $1 000 000. This book is based on real people and events; however, many of those events are contested by main character Semyon Dukach.

The casino has made Monte Carlo so well known for games of chance that mathematical methods for solving various problems using many quasi-random numbers - numbers with the statistical distribution of numbers generated by chance - are formally known as Monte Carlo methods. Monte Carlo was part of the plot in a few James Bond novels and films. 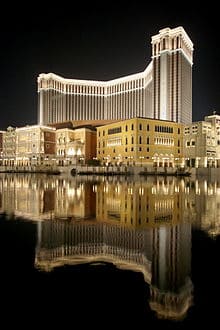 The former Portuguese colony of Macau, a special administrative region of China since 1999, is a popular destination for visitors who wish to gamble. This started in Portuguese times, when Macau was popular with visitors from nearby British Hong Kong where gambling was more closely regulated. The Venetian Macao is currently the largest casino in the world. Macau also surpassed Las Vegas as the largest gambing market in the world.

Singapore is an up-and-coming destination for visitors wanting to gamble. Although there are currently only two casinos(both foreign owned), in Singapore. The Marina Bay Sands is the most expensive standalone casino in the world, at a price of US$8 Billion, and is among the worlds top ten most expensive buildings. The Resorts World Sentosa has the worlds largest oceanarium.

With currently over 900 casinos, the United States has the largest number of casinos in the world. The number continues to steadily grow as more states seek to legalize casinos. 38 states now have some form of casino gambling. Relatively small places such as Las Vegas are best known for gambling; larger cities such as Chicago are not defined by their casinos in spite of the large turnover.

The Las Vegas Valley has the largest concentration of casinos in the United States. Based on revenue, Atlantic City, New Jersey ranks second, and the Chicago region third.

The Nevada Gaming Control Board divides Clark County, which is coextensive with the Las Vegas metropolitan area, into seven regions for reporting purposes.

Indian gaming has been responsible for a rise in the number of casinos outside of Las Vegas and Atlantic City.

Given the large amounts of currency handled within a casino, both patrons and staff may be tempted to cheat and steal, in collusion or independently; most casinos have security measures to prevent this. Security cameras located throughout the casino are the most basic measure.

Modern casino security is usually divided between a physical security force and a specialized surveillance department. The physical security force usually patrols the casino and responds to calls for assistance and reports of suspicious or definite criminal activity. A specialized surveillance department operates the casino's closed circuit television system, known in the industry as the eye in the sky. Both of these specialized casino security departments work very closely with each other to ensure the safety of both guests and the casino's assets, and have been quite successful in preventing crime. Some casinos also have catwalks in the ceiling above the casino floor, which allow surveillance personnel to look directly down, through one way glass, on the activities at the tables and slot machines.

When it opened in 1989, The Mirage was the first casino to use cameras full-time on all table games.

In addition to cameras and other technological measures, casinos also enforce security through rules of conduct and behavior; for example, players at card games are required to keep the cards they are holding in their hands visible at all times.

Over the past few decades, casinos have developed many different marketing techniques for attracting and maintaining loyal patrons. Many casinos use a loyalty rewards program used to track players' spending habits and target their patrons more effectively, by sending mailings with free slot play and other promotions.

One area of controversy surrounding casinos is their relationship to crime rates. Economic studies that show a positive relationship between casinos and crime usually fail to consider the visiting population at risk when they calculate the crime rate in casino areas. Such studies thus count the crimes committed by visitors, but do not count visitors in the population measure, and this overstates the crime rates in casino areas. Part of the reason this methodology is used, despite it leading to an overstatement of crime rates is that reliable data on tourist count are often not available. In a 2004 report by the US Department of Justice, researchers interviewed people who had been arrested in Las Vegas and Des Moines and found that the percentage of problem or pathological gamblers among the arrestees was three to five times higher than in the general population. According to some police reports, incidences of reported crime often double and triple in communities within three years of a casino opening.