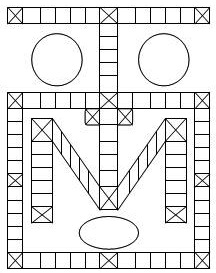 Dayakattai is an Indian dice game played by two to four people. It is very similar to Parchesi. It resembles a T20 cricket match.

The game employs a pair of long dice that are shaped like long cuboids, the Dayakattai. These dice also go by other names such as Daayam and Daala.

They are typically made of brass and have dots punched onto the long faces (1, 2, 3, 0). Each player starts with six coins/chips at a 'home' in the center of the game board.

Players take turns rolling the Dayakattai. When a player rolls a Daayam (0 on one die, 1 on another), he moves one of his pieces one space, roll again and advance his piece by the number indicated by the dice. To move all the pieces out of home, Daayam must be rolled for each one.

Pieces advance first along the side of the player and then in a clockwise direction. When a player rolls a one, five, six, or twelve (two 0s), they get to roll again. The numbers rolled can be distributed among the player's pieces (e.g. A player rolls 5, 12, 2. They can move one piece by twelve, move another by 5, and then move one more by 2. Alternately, the player could elect to have the three numbers shared by only two pieces or even move only one piece by the total number rolled.).

Pieces can 'cut' other pieces by landing on the same spot that they are in. A 'cut' piece is sent back to home. However, while in one of the safe zones (marked by an X), a piece cannot be cut. After completing one lap, a piece starts to move up the outer edge of the right side of its owner's leg of the game board. It stays on the corners instead of the spaces. The piece then needs to move the exact number of spaces to get to the center of the board. While at the corner of the home, a piece can be cut by another piece getting to the corner of its home. Players win by getting all of their pieces to the center of the board. For clarification as to the shape of the board, see the link below. You can also take out the coin from home when you get five in the dice.

A longer format is like a 50 over match. Players start with 8 coins, of which 4 have to move around the board in pairs, i.e. 4 coins form 2 pairs. Paired coins move only when an even number is rolled by the player. The number of paces moved gets halved (e.g. if a player rolls 2 or 4 or 6 or 12, the paired coins can move only 1 or 2 or 3 or 6 paces). Once the inner lap is completed, an outer lap must be completed before the player can take it to the outer edge and win the game.

One reason why this format takes a long time, apart from the fact that it has two laps, is due to the "paired coins". Since the pair can move only when even numbers are rolled, if a player has taken all his single coins to the center of the board, it is a daunting task to take the pairs back to the center. However, an advantage of paired coins is that a pair cannot be cut by a single coin, but the reverse is not true.

One more traditional Dayakattai was largely erased from our culture. This form is still in use in villages, and they call this "Vaahanam" or "Vimaanam," which translates as "a vehicle to God."

The rules are the same, with the pieces ranging to 12 numbers each. The cross, which comes for every 5 box counts, is called safe place. One team occupies the safe place (pazham zone), and it can't be occupied by the other team until it is cleared. The pieces in this safe place cannot be cut, and only if a team cuts at least one of the other team's pieces can it enter the pazham zone. Its zone is usually in the shape of letter M.

The first player to reach all 12 coins to pazham is the winner. It is also said in the famous Indian epic, the Mahābhārata that the Kauravas invited the Pandavas to gamble for their kingdom over this game.