Crown and Anchor stall at Battle of Flowers funfair in Jersey

Crown and Anchor is a simple dice game, traditionally played for gambling purposes by sailors in the Royal Navy, and also in the British merchant and fishing fleets.

The game originated in the 18th century. It is still popular in the Channel Islands and Bermuda, but is strictly controlled and may be played legally only on certain occasions, such as the Channel Islands' three annual agricultural shows, or Bermuda's annual Cup Match cricket game.

Three special dice are used in Crown and Anchor. The dice are equal in size and shape to standard dice, but instead of one through six pips, they are marked with six symbols: crown, anchor, diamond, spade, club and heart. (The last four are the same symbols used on playing cards.) 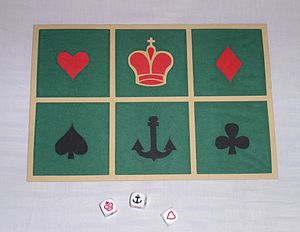 The game is played between a player and a banker. A canvas or felt mat marked with the six symbols is used for play. The player places bets on one or more symbols. He then throws the three dice. If there is a bet on any symbol which comes up on one or more of the dice, the banker pays the player the amount of his stake for each die showing that symbol: even money if one, 2:1 if two, and 3:1 if three. If the symbol doesn't come up, the player loses his bet.

On average, the player will receive back 92.1% of the amount he bets. The house takes roughly 7.9% of all money bet. Thus, the banker has a substantial edge. In a game at a festival or casino, the house will be banker. In a game among friends, each person serves as banker in turn.

A similar version of the game is played in Nepal called "Langur Burja" ("लङ्गुर बुर्जा" in Nepali). There is a similar Flemish version called Anker en Zon ("Anchor and Sun"), in which a sun symbol replaces the crown. The French version again uses the sun, and is called Ancre, Pique, et Soleil ("Anchor, Spade, and Sun"). A similar game played in China called Hoo Hey How (魚蝦蟹, Fish-Prawn-Crab in Hokkien) and Vietnam called or Bầu cua cá cọp.