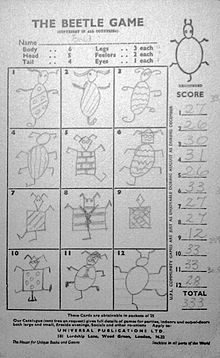 An example of a completed game.

Beetle is a British party game in which one draws a beetle in parts. The game may be played solely with pen, paper and a die or using a commercial game set, some of which contain custom scorepads and dice and others which contain pieces which snap together to make a beetle/bug. It is sometimes called Cooties or Bugs. The game is entirely based on random die rolls, with no skill involved.

The part drawn is decided by the roll of a die. The traditional rolls are:

The part corresponding to each roll of the die, however, may vary depending on the rules established by the players.

It is necessary to roll the correct number for the body before any other part may be drawn. To the body, one may attach the head, legs or tail, but the head must precede the antenna and eyes. The first player to draw all the requisite parts is the winner.

Beetle has been converted to a commercial game called Cootie, and is also released under the name Beetle by Milton Bradley. Beetles are constructed as plastic models. There are some minor gameplay differences, such as there being no wings on the beetles.

This game is played at social occasions known as a Beetle Drive, in which many rounds of Beetle are played. The players are in groups of four with a communal die, and the first player to complete their beetle shouts out "Beetle!" stopping the play of all the groups. Then the winner of each particular group (the player with the most complete beetle in that group) will move around a circle of tables to the right (clockwise), and the loser (the player with the least complete beetle) to the left (anti-clockwise), or sit still. The ultimate winner is usually either the one who has drawn the most complete beetles, or the one who has drawn the most parts in total. Beetle drives were very popular as Church fund raising events especially amongst non-conformist churches and the tradition continues to the present. These are often accompanied by a Pie and Pea Supper, particularly in the North East of England