Gomoku is an abstract strategy board game. Also called Gobang or Five in a Row, it is traditionally played with Go pieces (black and white stones) on a go board with 15x15 intersections; however, because once placed, pieces are not moved or removed from the board; gomoku may also be played as a paper and pencil game. This game is known in several countries under different names.

Black plays first if white did not just win, and players alternate in placing a stone of their color on an empty intersection. The winner is the first player to get an unbroken row of five stones horizontally, vertically, or diagonally.

It is said to have originated in China with the name Wu Zi Qi (五子棋). The name "Gomoku" is from the Japanese language, in which it is referred to as gomokunarabe (五目並べ). Go means five, moku is a counter word for pieces and narabe means line-up. The game is also popular in Korea, where it is called omok (오목 [五目]) which has the same structure and origin as the Japanese name. In the nineteenth century, the game was introduced to Britain where it was known as Go Bang, said to be a corruption of the Japanese word goban, said to be adopted from Chinese k'i pan (qí pán) "chess-board."

Black (the player who makes the first move) was long known to have a big advantage, even before L. Victor Allis proved that black could force a win (see below). So a number of variations are played with extra rules that aimed to reduce black's advantage.

The only fair opening rule currently is swap2 based on swap from Renju and first seen on kurnik.org. The first player places 3 stones (2 black 1 white, if black goes first) on the board, the second player has the choice to take black/white or place 2 more stones to change the shape and let the first player choose color. This is essentially a slightly more elaborate pie rule.

Computer search by L. Victor Allis has shown that on a 15x15 board, black wins with perfect play. This applies regardless of whether overlines are considered as wins, but it assumes that the rule of three and three is not used. It seems very likely that black wins on larger boards too. In any size of a board, freestyle gomoku is an m,n,k-game, and it is known that the second player does not win. With perfect play, either the first player wins or the result is a draw. 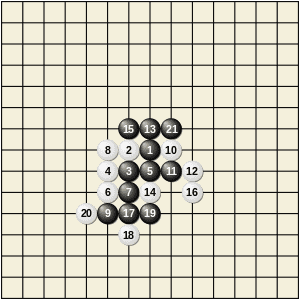 This game on the 15x15 board is adapted from the paper "Go-Moku and Threat-Space Search". 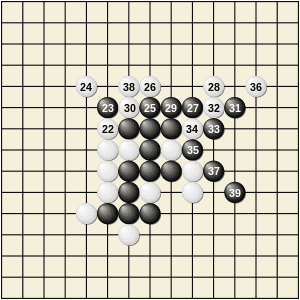 There are two forcing sequences for black, depending on whether white 22 is played next to black 15 or black 21. The diagram on the right shows the first sequence. All the moves for white are forced. Such long forcing sequences are typical in gomoku, and expert players can read out forcing sequences of 20 to 40 moves rapidly and accurately. 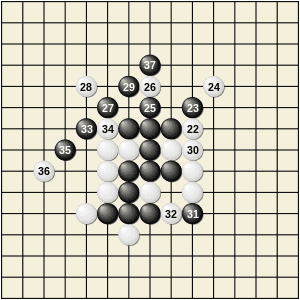 The diagram on the right shows the second forcing sequence. This diagram shows why white 20 was a blunder; if it had been next to black 19 (at the position of move 32 in this diagram) then black 31 would not be a threat and so the forcing sequence would fail.

World Championships in Gomoku have occurred 2 times in 1989, 1991. Since 2009 the tournament resumed, the opening rule being played was changed and now is swap2.

List of the tournaments occurred and title holders follows.