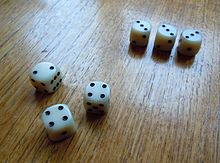 The game requires six standard dice and a pencil and paper for scoring. Each player starts out "off the table" with a score of zero. Players collect points during their turn, and either add those points to their cumulative score, or continue rolling with the risk of losing all points accumulated that turn if a scoring combination is not rolled.

To begin a turn, if the player is "off the table," he rolls all six dice. If the roll scores any points, he may set aside each scoring die or group of dice he wants to claim points from, and either roll all remaining dice, hoping to score additional points, or take the points already accumulated this turn and pass play to the next player. Most versions of the game require a minimum score of 300 points in each turn to bank the score and pass, otherwise the player must continue rolling. If the player rolls multiple scoring combinations, only one is required to be taken with each roll, all other dice may be rerolled if desired. If all six dice score points in one or more rolls of a single turn, the player rolls all six dice again and continues to score additional combinations, known as a sweep. If at any time a roll scores no points, the player forfeits all points scored that turn (commonly called "zilch" or "crapping out"), and play is passed to the next player. If a player gets zilch three turns in a row he may suffer a 500-point penalty or lose all his points previously accumulated, depending on the several rules used.

Example: Player 1 stops her turn with 700 points, and opts to not roll her remaining two dice. She adds 700 to her score, and it is now Player 2's turn. Player 2 may pick up those two dice, and if he scores anything with them, he adds those points to 700, as his score, and may bank or continue rolling as normal. Player 2 may instead opt to start over with all six dice, and start his own scoring from zero.

These are the base methods of scoring:

Dice are scored at the time they are rolled, so three or more of a kind must be rolled simultaneously, and dice from later rolls do not "stack" for the higher score.

Players have the options to call what they roll or call chance. if a player calls a roll and is successful that player will receive an addition 50 points to add to that score. If the player "craps-out" that he loses the 50 points.

Example: Player 1 rolls all six dice, and chooses to score three fours for 400 points. She rolls the remaining three dice for a 2, 4, 5; the additional 4 does not multiply the previous three of a kind, and she can only score 50 points for the lone 5. If she rolls two more 5's with the remaining dice, they will only score 50 points each, and do not form a three of a kind with the other 5.

In one variation, players must score exactly 10,000 without going over. In the event that a player goes over, the score for that turn is lost. In this variation, if the 10,000 is hit, that player wins immediately without giving the other players a chance to roll. However, if the winner leaves at least one die then the next player may 'roll off the score'.