Euwe was born in Watergraafsmeer, near Amsterdam. He studied mathematics at the University of Amsterdam, earning his doctorate in 1926, and taught mathematics, first in Rotterdam, and later at a girls' Lyceum in Amsterdam. He published a mathematical analysis of the game of chess from an intuitionistic point of view, in which he showed, using the Thue-Morse sequence, that the then-official rules did not exclude the possibility of infinite games.

Euwe won every Dutch chess championship that he participated in from 1921 until 1952, and additionally won the title in 1955 - his 12 titles are still a record. The only other winners during this period were Salo Landau in 1936, when Euwe, then world champion, did not compete, and Jan Hein Donner in 1954. He became the world amateur chess champion in 1928, at The Hague, with a score of 12/15.

Euwe had a young family and could only play competitive chess during school vacations, so his opportunities for international chess competition at the top level were limited. But he performed well in the few tournaments and matches for which he could find time from the early 1920s to the mid-1930s. Fine comments, "Euwe's main international successes came in the form of narrow defeats" - but these were in matches against the world's best: Alekhine (1926), José Raúl Capablanca (1931), and Spielmann (1935); and Euwe drew a match with Flohr in 1932. His playing strength gradually increased, so that by 1932 he and Flohr were regarded as Alekhine's most credible challengers.

At Zürich 1934, Euwe finished second, behind only World Champion Alexander Alekhine, and he defeated Alekhine in their game. Alekhine was in an eight-year stretch, from 1927-35, where he lost only six games in tournament play. 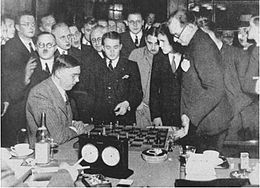 In 1933, Alekhine challenged Max Euwe to a championship match. Euwe, in the early 1930s, was regarded as one of three credible challengers (the others were José Raúl Capablanca and Salo Flohr). Euwe accepted the challenge for October 1935. Earlier that year, Dutch radio sports journalist Han Hollander asked Capablanca for his views on the forthcoming match. In the rare archival film footage where Capablanca and Euwe both speak, Capablanca replies: "Dr. Alekhine's game is 20% bluff. Dr. Euwe's game is clear and straightforward. Dr. Euwe's game - not so strong as Alekhine's in some respects - is more evenly balanced." Then Euwe gives his assessment in Dutch, explaining that his feelings alternated from optimism to pessimism, but in the previous ten years, their score had been evenly matched at 7-7.

On December 15, 1935 after 30 games played in 13 different cities around The Netherlands over a period of 80 days, Euwe defeated Alekhine by 15½-14½, becoming the fifth World Chess Champion. Alekhine quickly went two games ahead, but from game 13 onwards Euwe won twice as many games as Alekhine. His title gave a huge boost to chess in The Netherlands. This was also the first world championship match in which the players had seconds to help them with analysis during adjournments.

Euwe's win was regarded as a major upset - he reportedly had believed that beating Alekhine was unlikely - and is sometimes attributed to Alekhine's alcoholism. But Salo Flohr, who was helping Euwe during the match, thought over-confidence was more of a problem than alcohol for Alekhine in this match, and Alekhine himself said he would win easily. Former World Champions Vasily Smyslov, Boris Spassky, Anatoly Karpov, and Garry Kasparov analyzed the match for their own benefit and concluded that Euwe deserved to win and that the standard of play was worthy of a world championship. Former World Champion Vladimir Kramnik has said that Euwe won the 1935 match on merit and that the result was not affected by Alekhine's drinking before or during the match. 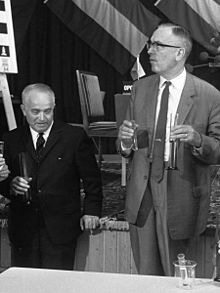 Euwe's performances in the great tournaments of Nottingham 1936 and the 1938 AVRO tournament indicate he was a worthy champion, even if he was not as dominant as the earlier champions. Reuben Fine wrote, "In the two years before the return match, Euwe's strength increased. Although he never enjoyed the supremacy over his rivals that his predecessors had, he had no superiors in this period."

Euwe lost the title to Alekhine in a rematch in 1937, also played in The Netherlands, by the lopsided margin of 15½-9½. Alekhine had given up alcohol to prepare for the rematch, although he would start drinking again later. Alekhine got back to the sort of form he had shown from 1927-35, when he dominated chess. The match was a real contest initially, but Euwe's play collapsed near the end and he lost four of the last five games. Fine, who was Euwe's second in this match, attributed the collapse to nervous tension, possibly aggravated by Euwe's attempts to maintain a calm appearance.

The two world title matches against Alekhine represent the heart of Euwe's career. Altogether, the two played 86 competitive games, and Alekhine had a +28 −20 =38 lead, according to chessgames.com. Many of Alekhine's wins came early in their series; he was nine years older, and had more experience during that time.

Euwe finished equal fourth with Alekhine and Reshevsky in the AVRO tournament of 1938 in The Netherlands, which featured the world's top eight players and was an attempt to decide who should challenge Alekhine for the world championship. Euwe also had a major organizational role in the event.

After Alekhine's death in 1946, Euwe was considered by some to have a moral right to the position of world champion, based at least partially on his clear second-place finish in the great tournament at Groningen in 1946, behind Mikhail Botvinnik. But Euwe consented to participate in a five-player tournament to select the new champion, the World Chess Championship 1948. However at 47, Euwe was significantly older than the other players, and well past his best. He finished last.

His final major tournament was the Candidates' Tournament in Zurich, 1953, in which he finished next to last.

In 1957 Euwe played a short match against 14-year-old future world champion Bobby Fischer, winning one game and drawing the other. His lifetime score against Fischer was one win, one loss, and one draw.

Euwe won a total of 102 first prizes in tournaments during his career. While it is true that many of those were local and were not very strong, the total is very impressive, considering that Euwe was never a true professional player.

He became a computer science professor at Tilburg University in 1964. 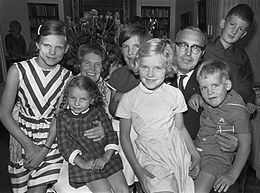 Euwe and wife are celebrating the 40th anniversary of their marriage on 3 August 1966, surrounded by their grandchildren 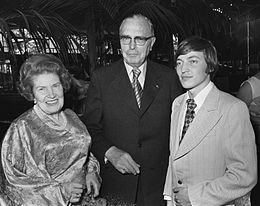 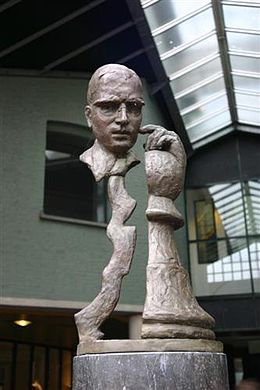 Sculpture of Euwe in Amsterdam by artist José Fijnaut

From 1970 (at age 69) until 1978, he was president of the FIDE. As president, Euwe usually did what he considered morally right rather than what was politically expedient. On several occasions this brought him into conflict with the USSR Chess Federation, which thought it had the right to dominate matters because it contributed a very large share of FIDE's budget and Soviet players dominated the world rankings - in effect they treated chess as an extension of the Cold War. These conflicts included:

Euwe lost some of the battles with the Soviets; for example, in 1973 he accepted the Soviets' demand that Bent Larsen and Robert Hübner, the two strongest non-Soviet contenders (Fischer was now champion), should play in the Leningrad Interzonal tournament rather than the weaker one in Petrópolis. Larsen and Hübner were eliminated from the competition for the World Championship because Korchnoi and Karpov took the first two places at Leningrad. Some commentators have also questioned whether Euwe did as much as he could have to prevent Fischer from forfeiting his world title in 1975.

Despite the turbulence of the period, most assessments of Euwe's performance as president of FIDE are sympathetic:

He died in 1981, age 80, of a heart attack. Revered around the chess world for his many contributions, he had travelled extensively while FIDE President, bringing many new members into the organization.

Euwe was noted for his logical approach and for his knowledge of the openings, in which he made major contributions to chess theory. Paradoxically his two title matches with Alexander Alekhine were displays of tactical ferocity from both sides. But the comments by Kmoch and Alekhine (below) may explain this: Euwe "strode confidently into some extraordinarily complex variations" if he thought logic was on his side; and he was extremely good at calculating these variations. On the other hand he "often lacked the stamina to pull himself out of bad positions".

Alekhine was allegedly more frank in his Russian-language articles than in those he wrote in English, French or German. In his Russian articles he often described Euwe as lacking in originality and in the mental toughness required of a world champion. Gennadi Sosonko thought Euwe's modesty was a handicap in top-class chess (although Euwe was well aware of how much stronger he was than "ordinary" grandmasters).

Vladimir Kramnik also says Euwe anticipated Botvinnik's emphasis on technical preparation, and Euwe was usually in good shape physically because he was a keen sportsman.

Euwe wrote over 70 chess books, far more than any other World Champion; some of the best-known are The Road to Chess Mastery, Judgement and Planning in Chess, The Logical Approach to Chess, and Strategy and Tactics in Chess Play. Former Soviet grandmaster Gennadi Sosonko used Euwe's Practical Chess Lessons (Practische Schaaklessen) as a textbook when teaching in the Leningrad House of Pioneers, and considers it "one of the best chess books ever". Fischer World Champion, an account of the 1972 World Chess Championship match, co-authored by Euwe with Jan Timman, was written in 1972 but not published in English until 2002. Euwe's book From My Games, 1920-1937 was originally published in 1939 by Harcourt, Brace and Company, and was republished by Dover in 1975 (ISBN 0-486-23111-9).

In Amsterdam there is a Max Euwe Plein (square) (near the Leidseplein) with a large chess set and statue, where the 'Max Euwe Stichting' is located in a former jailhouse. It has a Max Euwe museum and a large collection of chess books.

His granddaughter, Esmee Lammers, has written a children's book called Lang Leve de Koningin (Long Live the Queen), which is popular with young people. It is a fairytale about a young girl who learns to play chess and at the same time finds her father. Lammers filmed the story in 1995. (IMDB entry.)