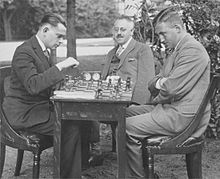 Salo was born into a Jewish family in Bochnia, Poland (then Galicia, Austria-Hungary). In 1914 (World War I), the Landau family fled the Russians to Vienna, and young Salo was sent to friends in Rotterdam in the Netherlands.

For some years, he was the Dutch number two, behind Max Euwe.

Landau had one outstanding result at Rotterdam in 1931, where he finished 1st ahead of Edgard Colle, Savielly Tartakower, and Akiba Rubinstein, defeating all three in the process.

In 1936, he won the 10th Dutch national championship (although the world champion, Euwe, did not compete).

Finally, in September 1942, Landau tried to escape the Nazis by fleeing to Switzerland with his family, but they were caught on September 28 in Breda, near the border with Belgium and sent to Westerbork transit camp. He was sent to a concentration camp in Gräditz, Silesia in November 1943, where he died sometime between December 1943 and 31 March 1944 (probably March). His wife and young daughter, whose hiding place was betrayed, were sent to Auschwitz in September 1944, where they were gassed on October 12, 1944.