Andor (André, Andre, Andrei) Arnoldovich Lilienthal (May 5, 1911 - May 8, 2010) was a Hungarian and Soviet chess Grandmaster. In his long career, he played against ten male and female world champions, beating Emanuel Lasker, José Raúl Capablanca, Alexander Alekhine, Max Euwe, Mikhail Botvinnik, Vasily Smyslov, and Vera Menchik. In a 2005 article, Slobodan Adzic wrote that Lilienthal was still active, in good health, driving his car, and writing articles for chess magazines. At the time of his death, he was the oldest living grandmaster, and the last surviving person from the original group of grandmasters awarded the title by FIDE in 1950.

Lilienthal was born in Moscow, Russia, and moved to Hungary at the age of two. He played for Hungary in three Chess Olympiads: Folkestone 1933 (scoring +7 −0 =6 as the reserve, the fifth player on the team), Warsaw 1935 (scoring +11 −0 =8 on second board), and Stockholm 1937 (scoring +9 −2 =6 on first board, leading his team to the silver medal). He won the individual gold medal for his board (reserve and second board, respectively) at the 1933 and 1935 Olympiads, and had the fourth-best result on first board in 1937. His total score in the Olympiads was a remarkable 75.51%.

Emigrating to the Soviet Union in 1935, Lilienthal became a Soviet citizen in 1939. He played in the USSR Chess Championship eight times. His best result came in the 1940 championship, when he tied for first with Igor Bondarevsky, ahead of Smyslov, Paul Keres, Isaac Boleslavsky, Botvinnik, and 14 other players. He qualified for the Candidates Tournament once, in 1948.

From 1951 until 1960 he was Tigran Petrosian's trainer. Lilienthal began a friendship with Vasily Smyslov in 1938, and was Smyslov's second in his world championship matches against Botvinnik. He retired from tournament play in 1965 and returned to Hungary in 1976. His last tournament was Zamárdi 1980, where he finished sixth in the B group, scoring +3 −1 =11. 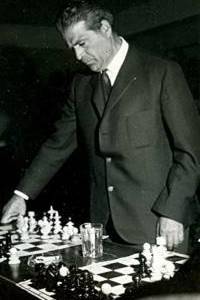 Lilienthal vs. Capablanca
Position after 19.dxe5

The game is famed, and Lilienthal relates, "wherever I went on an exhibition tour, both in the Soviet Union and elsewhere, chess players and fans always asked me to show them how I sacrificed the queen against the great Cuban." When Bobby Fischer noticed Lilienthal in the audience at his 1992 return match against Boris Spassky, Fischer greeted him with the remark "Pawn e5 takes f6."