On August 24, 1983 Donner suffered a stroke, which he wrote happened "just in time, because when you are 56 you do not play chess as well as you did when you were 26". After surviving the stroke, he went to live in Vreugdehof, which he described as "a kind of nursing-home". He was unable to walk, but had learned to type with one finger, and wrote for NRC Handelsblad and Schaaknieuws.

Donner was also a chess columnist and writer. He was famous for his outspoken and often outrageous columns about subjects such as women, politics, and fellow Dutch Grandmaster Lodewijk Prins, whom Donner claimed "cannot tell a knight from a bishop".

In 1987, the book De Koning ("The King") was published, which contained 162 of his chess columns, all but the last written between 1950 and 1983, collected by Tim Krabbé and Max Pam. Also in 1987, Donner received the Henriёtte Roland-Holst Prize, one of the Netherlands' most prestigious literary awards, for Na mijn dood geschreven ("Written after my death"), a selection from the mini-columns he had written for NRC Handelsblad. On November 27, 1988, Donner died of a gastric hemorrhage. He is buried at Zorgvlied cemetery.

In 2006, New in Chess published an English translation of the complete De Koning, entitled The King: Chess Pieces. An abridged edition had previously appeared in English in the 1990s. 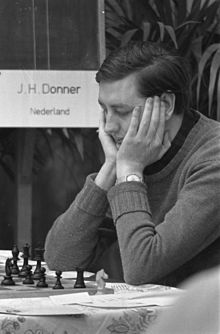 
In round one of the Olympiad China won a famous victory over Iceland. Amongst the casualties was Grandmaster Sigurjonsson who lost to Qi Jung Xuan. Coming upon Sigurjonsson, ... Donner, had attempted to console him with the following unfortunate choice of words: "Tell me, Grandmaster, how can a Western European Grandmaster lose to a Chinaman?" In round eight, the Chinese played Holland. And the unlucky Donner got an answer to his question...

The character Onno Quist in the novel (and film) The Discovery of Heaven by Harry Mulisch is based on Donner.

Donner considered the following games to be his two best: