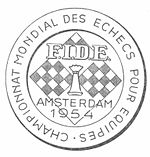 The 11th Chess Olympiad, organized by the FIDE and comprising an open team tournament, as well as several other events designed to promote the game of chess, took place between September 4 and September 25, 1954, in Amsterdam, Netherlands.

30 teams had applied, but only 26 eventually took part. The most notable absentees were the United States, who couldn't afford the travelling expenses due to financial difficulties in the USCF.

The Soviet team once again won the event, followed by Argentina and Yugoslavia. Unlike the previous Olympiad, however, they dominated this one completely and crushed all opposition, winning the final by an astounding 7 points. Keres' amazing score of 96.4% was an all-time record; he drew his first game (against Nilsson of Sweden) and won the rest.

A total of 26 teams entered the competition and were divided into four preliminary groups of six or seven7 teams. The top three from each group advanced to Final A, and the rest to Final B. All groups and finals were played as round-robin tournaments.

Group 1 was won by the Soviet Union, well ahead of the Dutch hosts and Iceland. Austria, Finland, and Greece finished in the bottom half.

Argentina took first place in group 2, ahead of Bulgaria and Czechoslovakia. Canada, Italy, and Ireland made up the rest of the group.

Group 3 was won by Israel, ahead of Yugoslavia and Sweden. Denmark, Norway, France, and Saar had to settle for a place in the consolation final.

Hungary cliched group 4, ahead of West Germany and England. Switzerland, Colombia, Belgium, and Luxembourg rounded up the group.