David Ionovich Bronstein (Russian: Дави́д Ио́нович Бронште́йн; February 19, 1924 - December 5, 2006) was a Soviet chess grandmaster, who narrowly missed becoming World Chess Champion in 1951. Bronstein was one of the world's strongest players from the mid-1940s into the mid-1970s, and was described by his peers as a creative genius and master of tactics. He was also a renowned chess writer, and his book Zurich International Chess Tournament 1953 is widely considered one of the greatest chess books ever written.

David Bronstein was born in Bila Tserkva, Ukraine, to Jewish parents. Growing up in a poor family, he learned chess at age six from his grandfather. As a youth in Kiev, he was trained by the renowned International Master Alexander Konstantinopolsky. He finished second in the Kiev Championship when he was only 15, and achieved the Soviet Master title at age 16 for his second-place result in the 1940 Ukrainian Chess Championship, behind Isaac Boleslavsky, with whom he became close friends both on and off the chessboard. He later went on to marry Boleslavsky's daughter, Tatiana, in 1984.

After completing high school in spring 1941, his plans to study mathematics at Kiev University were interrupted by the spread of World War II throughout eastern Europe in the early 1940s. He had begun play in the 1941 semifinal of the Soviet Championship, but this event was cancelled as war began. Shortly after the war's conclusion, he began attending Leningrad Polytechnical Institute where he studied for approximately one year.

Judged unfit for military service, Bronstein spent the war performing various jobs; this included doing some reconstruction of war-damaged buildings and other clerical/labor type jobs. Also during the war, his father, Johonon, was unfairly imprisoned for several years in the Gulag and was detained without substantial evidence of committing any crimes, it was later revealed. The rumor that Bronstein was related to the disgraced former Soviet Communist leader Leon Trotsky (whose real family name was Bronstein), was treated as unconfirmed, but doubtful, by Bronstein in his book The Sorcerer's Apprentice (1995). This belief could have explained the imprisonment of Bronstein's father.

With the tide turning towards an eventual Soviet war victory over the Nazi invaders, Bronstein was able to once again play some competitive chess, and he defeated Soviet champion Mikhail Botvinnik at the 1944 USSR Championship, which was his own first appearance at the Soviet top-standard event. Bronstein moved to Moscow as the war wound up. Theretofore seen as a promising but essentially unproven young player, one of dozens in the deep Soviet vanguard, he raised his playing level dramatically to place third in the 1945 USSR Championship. This superb result earned him a place on the Soviet team; he won both his games played on board ten, helping the Soviet team to victory in the famous 1945 USSR vs. USA Radio Chess Match. He then competed successfully in several team matches, and gradually proved he belonged in the Soviet chess elite. Bronstein tied for first place in the Soviet Championships of both 1948 and 1949.

Bronstein's first major international tournament success occurred at the Saltsjöbaden Interzonal of 1948, which he won. His qualifying place in this event came through nominations from foreign chess federations. He earned his Grandmaster title in 1950, when FIDE, the World Chess Federation, formalized the process. His Interzonal win qualified him for the Candidates' Tournament of 1950 in Budapest. Bronstein became the eventual Candidates' winner over Boleslavsky in a (Moscow) 1950 playoff match, following two overtime match games, after the two had tied in Budapest, and then again remained level over the 12 scheduled match games.

The period 1945-50 saw a meteoric rise in Bronstein's development, as he reached the World Chess Championship challenge match, in 1951.

Bronstein is widely considered to be one of the greatest post-war players not to have won the World Championship (an accolade he shares with the likes of Reuben Fine, Paul Keres, Viktor Korchnoi and Akiba Rubinstein). He came close to that goal when he drew the 1951 challenge match for the title of World Champion by a score of 12-12 with Mikhail Botvinnik, the reigning champion. Each player won five games, and the remaining 14 games were drawn.

In a match where the lead swung back and forth several times, the two titans tested each other in a wide variety of opening formations, and every game (except the 24th) was full-blooded and played hard to a clear finish. Bronstein often avoided lines he had favored in earlier events, and frequently adopted Botvinnik's own preferred variations. This strategy seemed to catch Botvinnik by surprise; the champion had not played competitively for three years since winning the title in 1948. The quality of play was very high by both players, although Botvinnik would later complain of his own weak play. He only grudgingly acknowledged Bronstein's huge talent. Bronstein claimed four of his five match wins by deep combinational play, winning before adjournment in highly complex fashion. He led by one point with two games to go, but lost the 23rd game and drew the final (24th) game. Under FIDE rules, the title remained with the holder, and Bronstein was never to come so close again. He later wrote that it was likely better that he didn't win the world title, since his free-spirited, artistic personality would have been at odds with Soviet bureaucracy.

Botvinnik wrote that Bronstein's failure was caused by a tendency to underestimate endgame technique, and a lack of ability in simple positions. Botvinnik won four virtually level endgames after the adjournments, and his fifth win came in an endgame which Bronstein resigned at move 40. These adjourned games made up four of Botvinnik's five match wins; Botvinnik had no more than a minimal advantage in these games when they were adjourned at move 40.

It has been alleged by some that Bronstein was forced by the Soviet authorities to throw this match, and to allow Botvinnik to win. Similarly, in the 1953 Candidates' Tournament at Neuhausen and Zürich, it has been speculated that there was pressure on the top non-Russian Soviets, Keres and Bronstein, to allow Vasily Smyslov to win. Even in the wake of glasnost, however, Bronstein only partially confirmed these rumors in his public statements or writings, admitting only to 'strong psychological pressure' being applied, and that it was up to Bronstein himself whether to decide to give in to this pressure. Bronstein's father was sometimes secretly in the audience during the 1951 title match games, at a time when he was not officially permitted in Moscow. In his final book, however, published in 2007, shortly after his death, Bronstein more strongly implied that Smyslov was favored for Zurich 1953 by the Soviet Chess Federation, and that other Soviet representatives were pressured to make this happen. 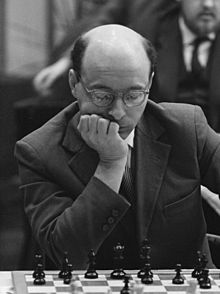 Bronstein challenged throughout in Switzerland, and finished tied for second through fourth places, together with Keres and Samuel Reshevsky. This result qualified him directly for the 1955 Gothenburg Interzonal, which he won with an unbeaten score. From there it was on to another near miss in the 1956 Candidates' tournament in Amsterdam, where he wound up in a large tie for third through seventh places, behind winner Smyslov and runner-up Keres.

Bronstein had to qualify for the 1958 Interzonal, and did so by placing third at the USSR Championship, Riga 1958. At the 1958 Interzonal in Portorož, Bronstein, who had been picked as clear pre-event favorite by Bobby Fischer, missed moving on to the 1959 Candidates' by half a point, dropping a last-round game to the much weaker Filipino Rodolfo Tan Cardoso, when the electrical power failed due to a thunderstorm during the game, and he was unable to regain concentration. Bronstein missed qualification at the Soviet Zonal stage for the 1962 cycle. Then at the Amsterdam 1964 Interzonal, Bronstein scored very well, but only three Soviets could advance, by a FIDE rule, and he finished behind countrymen Smyslov, Mikhail Tal, and Boris Spassky, who finished as the joint winners, along with Larsen. His last Interzonal was at age 49 when he finished sixth at Petropolis 1973.

Bronstein took many first prizes in tournaments, among the most notable being the Soviet Chess Championships of 1948 (jointly with Alexander Kotov) and 1949 (jointly with Smyslov). He also tied for second place at the Soviet Championships of 1957 and 1964-65. He tied first with Mark Taimanov at the World Students' Championship in 1952 at Liverpool. Bronstein was also a six-time winner of the Moscow Championships, and represented the USSR at the Olympiads of 1952, 1954, 1956 and 1958, winning board prizes at each of them, and losing just one of his 49 games in those events. Along the way he won four Olympiad team gold medals. In the 1954 team match against the USA (held in New York), Bronstein scored an almost unheard-of sweep at this level of play, winning all four of his games on second board. 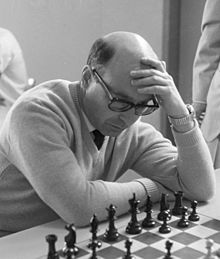 David Bronstein wrote many chess books and articles, and had a regular chess column in the Soviet newspaper Izvestia for many years. He was perhaps most highly regarded for his famous authorship of Zurich International Chess Tournament 1953 (English translation 1979). This book was an enormous seller in the USSR, going through many reprints, and is regarded among the very best chess books ever written. More recently, he co-authored the autobiographical The Sorcerer's Apprentice (1995), with his friend Tom Fürstenberg. Both have become landmarks in chess publishing history; Bronstein seeks to amplify the ideas behind the players' moves, rather than burdening the reader with pages of analysis of moves that never made it onto the scoresheet. Bronstein's romantic vision of chess was shown with his very successful adoption of the rarely seen King's Gambit in top-level competition. His pioneering theoretical and practical work (along with fellow Ukrainians Boleslavsky and Efim Geller) in transforming the King's Indian Defence from a distrusted, obscure variation into a popular major system should be remembered, and is evidenced in his key contribution to the 1999 book, Bronstein on the King's Indian. Bronstein played an exceptionally wide variety of openings during his long career, on a scale comparable with anyone else who ever reached the top level. 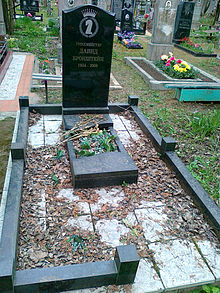 Grave of Bronstein in Minsk, Belarus

Bronstein refused to sign a group letter denouncing the 1976 defection of Viktor Korchnoi, and he paid a personal price for this independence, as his state-paid Master's stipend was suspended, and he was also barred from major tournaments for more than a year. He was virtually banned from high-class events for several years in the mid-1980s.

Bronstein was a chess visionary. He was an early advocate of speeding up competitive chess. In 1973 he introduced the idea of adding a small time increment for each move made, a variant of which has become very popular in recent years and is implemented on almost all digital chess clocks. He challenged computer programs at every opportunity, usually achieving good results.

In later years, Bronstein continued to stay active in tournament play, often in Western Europe after the breakup of the USSR. He maintained a very good standard (jointly winning the Hastings Swiss of 1994-95 at the age of 70), wrote several important chess books, and inspired young and old alike with endless simultaneous displays, a warm, gracious attitude, and glorious tales of his own rich chess heritage. Bronstein died on December 5, 2006 in Minsk, Belarus of complications from high blood pressure.

His final book was nearly complete when he died; it was published in 2007: Secret Notes, by David Bronstein and Sergei Voronkov, Zürich 2007, Edition Olms, ISBN 978-3-283-00464-4. In the introduction to the book, Garry Kasparov, a fervent admirer of Bronstein's chess contributions, offers his opinion that Bronstein, based on his play, should have won the 1951 match against Botvinnik.

During the 1962 Moscow v. Leningrad Match Bronstein played the top board for the Moscow team. With the white pieces he defeated Viktor Korchnoi in a game that ended with a tactic he later described as "one of the best combinations in my life, if not the best."