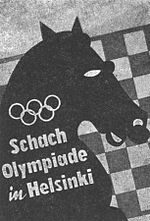 The poster of the 1952 Chess Olympiad.

The 10th Chess Olympiad, organized by the FIDE and comprising an open team tournament, as well as several other events designed to promote the game of chess, took place between August 9 and August 31, 1952, in Helsinki, Finland.

The Olympiad was especially notable for the debut of the Soviet team, who instantly won their first gold medals and went on to completely dominate the Olympiads for the next four decades.

After the tournament, it was generally agreed that the small preliminary and final groups of only 8-9 teams left too much open to chance, since a single blunder would have too big an impact on the final standings. Consequently, FIDE decided that in the future, no final should have less than 12 participants.

Twenty-five teams entered the competition and were divided into three preliminary groups of eight or nine teams. The top three from each group advanced to Final A, the teams placed fourth-sixth to Final B, and the rest to Final C. All groups and finals were played as round-robin tournaments.

Group 1 was won by Argentina, ahead of West Germany and Czechoslovakia. England, Denmark, and Cuba took the following places, while Iceland, Saar, and Luxembourg finished in the bottom third.

Sweden took first place in group 2, ahead of Hungary and Yugoslavia. East Germany, Austria, and Italy took places four through six, while Brazil and Norway finished seventh and eighth.

Group 3 was won by the Soviet Union, well ahead of the United States and the Finnish hosts. Israel, the Netherlands, and Poland took the following places, while Switzerland and Greece finished at the bottom.