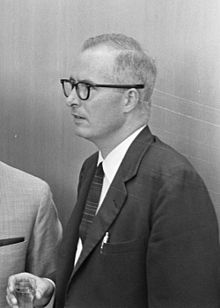 Robert Eugene Byrne (April 20, 1928 - April 12, 2013) was an American chess Grandmaster and chess author. He won the U.S. Championship in 1972, and was a World Chess Championship Candidate in 1974. Byrne represented the United States nine times in Chess Olympiads from 1952 to 1976 and won seven medals. He was the chess columnist from 1972 to 2006 for the New York Times, which ran his final column (a recounting of his 1952 victory over David Bronstein) on November 12, 2006. Byrne worked as a university professor for many years, before becoming a chess professional in the early 1970s.

Byrne and his younger brother Donald grew up in New York City and were among the "Collins Kids", promising young players who benefited from the instruction and encouragement of John W. Collins. Both ultimately became college professors and among the leading chess players in the country. They were part of a talented new generation of young American masters, which also included Larry Evans, Arthur Bisguier, and George Kramer.

Robert Byrne's first Master event was Ventnor City 1945, where he scored a respectable 4/9 to place 8th; the winner was Weaver Adams. He tied 1st-2nd in the Premier Reserves section at the U.S. Open Chess Championship, Pittsburgh 1946. College studies limited his opportunities for the next several years; he represented the U.S. in a 1950 radio match against Yugoslavia. In the Maurice Wertheim Memorial, New York 1951, Robert Byrne scored 6/11 for a tied 6-7th place; this was a Grandmaster round-robin with 6 of the world's top 36 players, and it was won by Samuel Reshevsky.

Byrne became an International Master based on his results at the 1952 Chess Olympiad at Helsinki (bronze medal on third board). In that same year he graduated from Yale University. He went on to become a professor of philosophy at Indiana University, and his academic career left him little time for chess. He did represent the U.S. in team matches against the Soviet Union at New York 1954 (losing 1½-2½ to Alexander Kotov), and Moscow 1955 (losing ½-3½ to Paul Keres).

Byrne placed shared 4-7th at the 1957 U.S. Open Chess Championship in Cleveland with 9/12, a point behind joint winners Bobby Fischer and Arthur Bisguier. Byrne did not play in his first U.S. Chess Championship until age 30 in 1958-59, placing tied 9-10th with 4/11; the winner was Bobby Fischer. But Byrne improved dramatically the next year in the same event to place 2nd with 8/11, ahead of Reshevsky and Pal Benko, as Fischer won again.

In 1964, Byrne's third-place finish at the Buenos Aires tournament (behind Paul Keres and World Champion Tigran Petrosian), with 11½/17, made him an International Grandmaster. Byrne shared 2nd-3rd places in the U.S. Championship 1965-66 with 7½/11; Fischer won again, but Byrne defeated Fischer in their individual game. He shared the 1966 U.S. Open title with Pal Benko at Seattle. He scored 4½/11 for a shared 8-10th place, in the U.S. Championship 1966-67, with Fischer winning. Byrne qualified for his first Interzonal tournament, Sousse 1967, but scored just 7½/22, far short of advancing.

By the late 1960s, he was playing chess semi-professionally. He won the 1972 U.S. Championship; after tying with Samuel Reshevsky and Lubomir Kavalek in the tournament proper, Byrne won the 1973 playoff at Chicago. Byrne achieved his career highlight of third place at the Leningrad Interzonal in 1973, with 12½/17, which made him only the fourth American (after Samuel Reshevsky, Bobby Fischer, and Pal Benko) to qualify for the Candidates Tournament (part of the world chess championship process). Byrne lost his first-round Candidates' match to former world champion Boris Spassky by 1½-4½ at San Juan, Puerto Rico 1974.

As a 1974 Candidate, Byrne was seeded directly to the 1976 Biel Interzonal, where he performed very strongly, but missed a playoff berth by only half a point, sharing 5-6th places with 11½/17.

Byrne played nine times for the United States, with a total of (+51 =53 -12), for 66.8 per cent, and won seven individual and team medals. His detailed results follow.

When he became the columnist for the Times in 1972, he became less active as a player. He did, nevertheless, win tournaments at Torremolinos (1976-77), Harare (1983), and Lagos (1993). He has also been a frequent contributor to Chess Life magazine, the publication of the United States Chess Federation. He has chaired USCF's committee on masters' affairs and been one of its vice presidents. Byrne was inducted into the U.S. Chess Hall of Fame in 1994.

Throughout his career, Byrne improved his results level by level in major competitions, at the U.S. Open, the U.S. Championship, the Olympiad, and the Interzonal. He made original contributions in several opening systems. He was the first to play 6.Be3 against the Najdorf Variation of the Sicilian Defense (1.e4 c5 2.Nf3 d6 3.d4 cxd4 4.Nxd4 Nf6 5.Nc3 a6 6.Be3); this system has been named for him and has been very popular since the mid-1980s. He developed the Byrne Variation against the King's Indian Defense in the Saemisch Variation, with a quick queenside expansion by Black. He used the Dutch Defense with success when that opening was rarely seen at the top level. His opening repertoire was wide with both colors, and featured both Open and Closed games, which made him a challenge to prepare for. Byrne played competitively until age 74 in 2002, with an average of a couple of significant events per year even past age 60. He retired from writing his chess column at age 78.

Byrne died in 2013 at his home in Ossining, New York from Parkinson’s disease.