Lubomir (Lubosh) Kavalek (Czech: Lubomír Kaválek, born August 9, 1943) is a Czech-American world-class chess player. He was awarded both the International Master and International Grandmaster titles by FIDE in 1965. He won two Czechoslovak and three U.S. championships, and was rated among the world’s top 10 players. He was inducted into the World Chess Hall of Fame in 2001. Kavalek is also a chess coach, organizer, teacher, commentator, author and award-winning columnist. 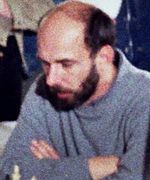 Kavalek was born in Prague, Czechoslovakia (now the Czech Republic). He studied communication and journalism at Charles University. He won the championship of Czechoslovakia in 1962 and 1968. When Soviet tanks rolled into Prague in August 1968, Kavalek was playing in the Akiba Rubinstein Memorial in Poland, in which he finished second. Kavalek, who had always hated Communism, decided to defect to the West rather than return to Soviet-dominated Czechoslovakia. He bought several crates of vodka with his winnings, used them to bribe the border guards, and drove to West Germany. "It was the biggest loss ever suffered by Czechoslovakian chess," wrote Andrew Soltis in "The 100 Best Chess Games of the 20th Century, Ranked."

In 1970, on the way to the United States, Kavalek won a strong tournament in Caracas (scoring +10−1=6). He played the first half under the Czechoslovakian flag, the second half under the American flag. He represented the United States before officially setting foot in his new adopted country. Kavalek moved to Washington, D.C., studied Slavic literature at George Washington University and worked at Voice of America (1971-72). In 1973 he became a full-time chess professional. He later became a United States citizen and now lives in Reston, Virginia.

“During the 1970s Kavalek was one of the most active and successful tournament competitors from the USA.”

Because of these results, Kavalek moved in 1974 to number 10 in the world on the official FIDE rating list with 2625 points. Also in 1974 he shared first place in Solingen (Kavalek, Polugaevsky 10/14, Spassky,Kurajica 8.5).

In 1979, Kavalek played in the double-round Man and his World Chess Challenge in Montreal, which he also organized. It was the most bizarre result of his career. He finished last in first half with 1.5/9, but won the second half with 6.5/9. He ended tying for seventh place overall. 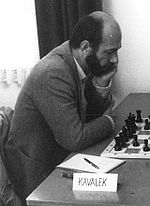 Kavalek played in nine Chess Olympiads, representing Czechoslovakia in 1964 and 1966 and the US from 1972 through 1986 except 1980. In his seven appearances on the US team he played top board three times and second board twice, and the team collected one gold and five bronze medals.

In the Nordic team vs. United States in Reykjavik in 1986, Kavalek on second board defeated Bent Larsen 1.5-0.5.

In 1976, Kavalek was the top player on the Washington Plumbers team which won the National Chess League.

Kavalek lost two matches against two of the world’s best players in Solingen, Germany. In 1970 he lost to Bent Larsen with a score 2-6 and in 1977 he was defeated by Boris Spassky 2-4.

Kavalek ranked among the top 100 players in the world continuously from the end of 1962 until September 1988, peaking at number 10 in 1974, when he achieved his peak Elo rating of 2625 on the FIDE Rating list. He was again rated in the top 10 active players in 1980. By Chessmetrics ratings, he achieved his peak ranking of number 18 in early 1974 with a Chessmetrics rating of 2695.

Kavalek had a notable coaching career, working with Mark Diesen, Robert Byrne, Yasser Seirawan, Eugene Torre and Robert Hübner. Kavalek was also one of Bobby Fischer's seconds in the World Chess Championship 1972 and served as British grandmaster Nigel Short's trainer in the 1990 Interzonal in Manila, and in Short's successful Candidates matches against British grandmaster Jonathan Speelman, Israeli grandmaster Boris Gelfand, former world champion Anatoly Karpov and Dutch grandmaster Jan Timman, leading up to Short's 1993 world championship match against Garry Kasparov. Short and Kavalek parted company shortly after the beginning of the latter match, which Kasparov won decisively. Short and Kavalek later wrote articles for chess magazines criticizing each other. Kavalek was acting captain and team analyst of the Rest of the World team against the Soviet Union in London in 1984. 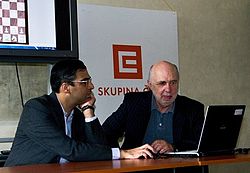 Kavalek was selected to Gallery of Distinguished Chess Journalists in 2006 and won Chess Journalists of America awards for the best newspaper column. Between 1960-2012 Kavalek’s chess magazine articles have appeared in different print and online publications such as Chess Life & Review (1970-1979) and British Chess Magazine (1994-2010). He was editor-in-chief of chess publishing for RHM Press in New York from 1973 to 1986. He was the chess columnist for the Washington Post from 1986 to 2010, his last column running on January 4, 2010. In May 2010 he became the chess columnist for The Huffington Post. He was a member of the jury to select the best and most important games in Chess Informant (1989-1993).

Here is a victory by the young Kavalek against Soviet grandmaster Eduard Gufeld. According to Larry Evans, Gufeld's soccer team had beaten Kavalek's the day before, and Kavalek vowed to get revenge:

Here is one of Kavalek's most remarkable games, in which he sacrificed a queen for a bishop against the strong Hungarian grandmaster Lajos Portisch: