Robert Hübner (born November 6, 1948) is a German chess Grandmaster, chess writer, and papyrologist. At eighteen, he was joint winner of the West German Chess Championship. In 1975, he became one of the world's leading players, rising to third place in the FIDE world ranking list in 1980.

At his strongest in the mid-seventies to early eighties, Hübner participated in many of the elite tournaments of the day, such as Tilburg 1978 and Montreal 1979 (The Tournament of Stars), playing alongside Anatoly Karpov, Mikhail Tal, and Jan Timman. There were tournament victories at Houston 1974, Munich 1979 (shared with Ulf Andersson and Boris Spassky), Rio de Janeiro Interzonal 1979 (shared with Lajos Portisch and Tigran Petrosian), and Linares 1985 (shared with Ljubomir Ljubojević). He remained active on the international circuit into the 2000s, but has never been a full-time chess professional due to his academic career.

He served as a second to Nigel Short in his efforts to win the World Chess Championship match against Garry Kasparov in 1993. In 2000 he won, with the German team, a silver medal in the 34th Chess Olympiad in Istanbul.

His International Master (IM) title was awarded in 1969 and his Grandmaster (GM) title in 1971. He was a candidate for the World Championship in 1981 and 1984, and played in the Interzonal some other years. 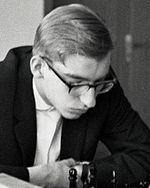 Over the chessboard, Hübner's technique has been described as efficient and ruthless. According to Bill Hartston - "His perfectionist and rather pessimistic approach, however, prevented him from reaching the very top." His progress was hampered by disputes and withdrawals at inopportune moments; he withdrew from his 1971 Candidates Match against Tigran Petrosian over a dispute about intolerable conditions, and again from a 1980 Candidates Match against Viktor Korchnoi. His fortune was dealt a particularly cruel blow at his 1983 Candidates Quarter Final match against Vasily Smyslov, when Smyslov refused to play tie-break rapid games (these were optional at the time and a noted strength of Hübner). The match was then awarded to Smyslov on the spin of a roulette wheel.

Additionally, Hübner is known as one of the world's best xiangqi players not from China.