The Nimzo-Indian Defence is a chess opening characterised by the moves:

This hypermodern opening was developed by Grandmaster Aron Nimzowitsch who introduced it to master-level chess in the early 20th century. Unlike most Indian openings, the Nimzo-Indian does not involve an immediate fianchetto, although Black often follows up with ...b6 and ...Bb7. By pinning White's knight Black prevents the threatened 4.e4 and seeks to inflict doubled pawns on White. White will attempt to create a pawn centre and develop his pieces to prepare for an assault on the Black position.

Black's delay in committing to a pawn structure makes the Nimzo-Indian (sometimes colloquially referred to as the "Nimzo") a very flexible defence to 1.d4. It can also transpose into lines of the Queen's Gambit or Queen's Indian Defence. The Nimzo-Indian is a highly respected defence to 1.d4, is played at all levels and has been played by every world champion since Capablanca. White often plays 3.g3 or 3.Nf3 to avoid the Nimzo-Indian, allowing him to meet 3.Nf3 Bb4+ (the Bogo-Indian Defence) with 4.Bd2 or 4.Nbd2, rather than 4.Nc3.

In the Nimzo-Indian, Black is generally prepared to concede the bishop pair by playing Bxc3. As dynamic compensation, he often doubles White's c-pawns, which represent a static weakness, and gains play against the central light squares d5 and e4, even in those instances where White is able to recapture with a piece after ...Bxc3. Black will aim to close the position to reduce the scope of White's bishops. To this end, Black must blockade the white pawn centre from advancing and neutralise White's attacking chances on the kingside. An example of Black's strategy carried out successfully is the game Mikhail Botvinnik versus Samuel Reshevsky from the 1948 World Chess Championship, which reached the position in the diagram after White's 24th move.

Earlier in the game, Reshevsky was able to block White's kingside attack by playing Nf6-e8 and f7-f5. Now, both White's bishops are reduced to defence, and White's queen is reduced to passivity at the a2-square to defend the pawns on a3 and c4. Without prospects for counterplay, White's game is strategically hopeless, and Black ultimately exchanged queens and won the endgame.

The Rubinstein System (named after Akiba Rubinstein) is White's most common method of combating the Nimzo-Indian. Svetozar Gligorić and Lajos Portisch made great contributions to the theory and practice of this line at top level during their careers. White continues his development before committing to a definite plan of action. In reply, Black has three main moves to choose from: 4...0-0, 4...c5, and 4...b6.

In addition, Black sometimes plays 4...d5 or 4...Nc6. 4...d5 can transpose to lines arising from 4...0-0, but White has the extra option of 5.a3 (known as the Botvinnik Variation). This forces Black to retreat the bishop to e7 or capture on c3, which transposes to a line of the Sämisch Variation long considered good for White because he will undouble his pawns at some point by playing cxd5, eliminating the weak pawn on c4, then prepare the e4 pawn break, backed by the bishop pair, which will gain force in the more open type of position which will ensue. 4...Nc6 is the Taimanov Variation, named after Russian GM Mark Taimanov. Black prepares to play ...e5, which may be preceded by...d5 and ...dxc4, or ...d6. The variation was tried several times by the young Bobby Fischer, and has long been favoured by GM Nukhim Rashkovsky.

White has completed his kingside development, while Black has claimed his share of the centre. At this point, the most important continuations are:

Black also has two rare alternatives on his eighth move worth mentioning: 8...Qe7 intending ...Rd8 is the Smyslov Variation, invented by former World Champion Vasily Smyslov, and 8...Bd7 followed by ...Bc6 is the Bronstein Variation, the brainchild of two-time world championship finalist David Bronstein. 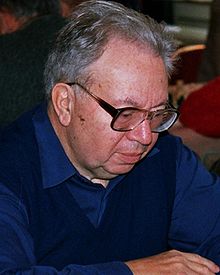 In general, the main line of the Rubinstein has held up very well for Black, so since the 1980s White has begun to look elsewhere for chances of obtaining an advantage. In the Rubinstein, White has often resorted to playing Ne2 rather than Nf3 at some point to be able to recapture on c3 with the knight, thus avoiding the doubled pawns. Two lines where White does this (following 4.e3 0-0) are:

Favoured by Nimzowitsch, 4...b6 is a move in accordance with the spirit of the Nimzo-Indian: Black fianchettoes his light-squared bishop to increase his control over e4. White usually continues 5.Ne2, avoiding the doubled pawns, or 5.Bd3, continuing his development (5.Nf3 usually transposes to 5.Bd3). The main variations emerging from this move are:

The Classical or Capablanca Variation was popular in the early days of the Nimzo-Indian, and though eventually superseded by 4.e3 it was revived in the 1990s; it is now just as popular as the Rubinstein. White aims to acquire the two bishops without compromising his pawn structure. The drawback is that the queen will move at least twice within the opening moves and that White's kingside development is delayed. Thus, even though White possesses the bishop pair, it is usually advisable for Black to open the game quickly to exploit his lead in development. Black has four common replies to 4.Qc2. These include 4...0-0, 4...c5, 4...d5, and 4...Nc6 (4...d6 intending ...Nbd7 and ...e5 is a rarer fifth option).

4.Nf3 is known as the Kasparov Variation, since Garry Kasparov used it to great effect against Anatoly Karpov in their 1985 World Championship match. Kasparov played 4.Nf3 six times, scoring three wins and three draws. Today as White, this is a favourite weapon of GM Alexei Barsov and former Women's Champion Nona Gaprindashvili.

White develops the knight to a natural square and waits to see Black's reply. 4...d5 transposes to the Ragozin Defence of the Queen's Gambit Declined and 4...b6 5.Bg5 Bb7 transposes to the Nimzo/Queen's Indian hybrid line, so 4...c5 is the most common move that stays within Nimzo-Indian territory. Now 5.e3 transposes to the Rubinstein System, but the main move is 5.g3, which leads to a position that also arises from the Fianchetto Variation. 5.g3 cxd4 6.Nxd4 0-0 7.Bg2 d5 8.cxd5 Nxd5 can be considered the main line. Black has dissolved White's centre, but the bishop on g2 exerts pressure on the black queenside, which White may augment with 9.Qb3.