Modern Chess Openings (usually called MCO) is an important reference book on chess openings, first published in 1911 by the British players Richard Clewin Griffith (1872-1955) and John Herbert White (1880-1920). Harry Golombek called it "the first scientific study of the openings in the twentieth century".

Although Bilguer's Handbuch des Schachspiels was more authoritative at the time MCO was first published, it was last published between 1912 and 1916, and was becoming outdated by the 1930s. MCO was popular with English-speaking players and has continued to be updated throughout the 20th century and into the 21st, with fifteen editions from 1911 through 2008. Early editions were small enough to fit in a pocket (the first edition was 190 pages), but later editions grew and the fifteenth and most recent version is 768 pages. In 1977, Harry Golombek said "The work became popular at once and for over forty years was regarded as the main book on the openings throughout the world."

The first three editions (1911, 1913, and 1916) were the work of Griffith and White, with an introduction by Henry Ernest Atkins. Editions through at least 1946 continued to be attributed to Griffith and White, with Philip Walsingham Sergeant and Maurice Edward Goldstein providing revisions starting with the fourth edition in 1925. In 1939, Reuben Fine became the first grandmaster to edit MCO. Fine was not able to work on subsequent editions of MCO, so in 1948 he wrote Practical Chess Openings. As Practical Chess Openings was not revised in any further editions, MCO remained the most popular English language opening reference. 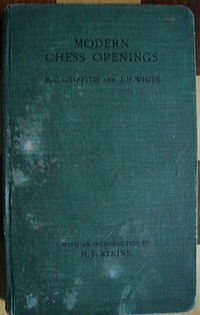 American Walter Korn worked on the seventh through thirteenth editions, assuming editorship starting with MCO-8 in 1952. Korn was assisted on certain editions by Jack Collins, Larry Evans, and Nick de Firmian. The first twelve editions used descriptive notation to record the moves, and only with MCO-13 in 1990 did the series begin to use the now-standard algebraic notation. The most recent edition, MCO-15 in 2008, was written and edited by de Firmian.

Since 1980, there have been other one-volume opening encyclopedias to rival MCO: Batsford Chess Openings (BCO) in 1982 and 1989, Nunn's Chess Openings (NCO) in 1999, and Paul van der Sterren's Fundamental Chess Openings in 2009. John Watson wrote that MCO-13 "really isn't up to modern expectations", but called MCO-14 "a vast improvement over its predecessor No. 13 in almost every respect" and comparable in quality to NCO.