He gained the International Master and International Grandmaster titles in 1980 and 1982 respectively, either side of two momentous Soviet Championship victories in 1980 (Vilnius - shared with Alexander Beliavsky) and 1981 (Frunze - shared with Garry Kasparov, whom he defeated in round 2). 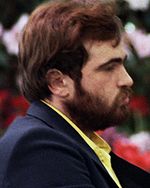 In the World Championship cycle, he was a runner-up at the Erevan Zonal of 1982 and qualified for the Interzonal at Las Palmas later the same year. Posting only a modest score however, he failed to progress to the Candidates stage of the competition.

He was champion of Israel in 1997 and shared the title in 1999. He has also represented his adopted country at the Chess Olympiad seven times between 1990 and 2002. At the European Team Chess Championship, he was first a member of the Soviet team at Plovdiv in 1983, when he won individual and team gold medals. Representing Israel thereafter, he took the board 4 individual gold medal at Batumi in 1999.

Over the years, he has assisted in many training programs, dating back to the late 1980s when he worked with Kasparov and Artur Yusupov. He played a training match with Kasparov in 1990 and lost 1-5. Other students and famous chess players whom he has seconded include Susan Polgar, Judit Polgár, and Emil Sutovsky.