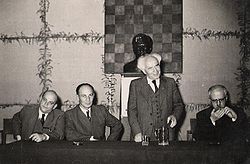 The Israeli Chess Championship is a chess event held every year in Israel.

From 1951-1971, the men's and women's championships were held every two years, eventually becoming an annual event. The 1998 Championship was held 8-24 November in Ramat Aviv. The single-elimination tournament, 32 players in the men's section and 16 in the women's, used an unusual time control of 100 minutes for 30 moves + 30 seconds per move. GM Eran Liss won the men's final over GM Victor Mikhalevski. After tying their 2-game match with one victory apiece, they then tied an active chess playoff with one win and two draws each. In a 5-minute blitz playoff, Liss won 2-0. Irina Yudasina won the women's final over Ella Pitem with one win and one draw.