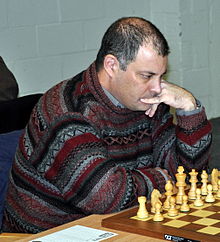 In 1982, he was European Junior Sub-Champion.

More recently, Alon has concentrated in the fields of chess coaching. His most famous pupil has been Emil Sutovsky (who is now [2008] working as a second for Gata Kamsky). He travels regularly to India, and works with a number of promising young Indian players e.g. Vidit. Asked what his best game was Greenfeld unhesitatingly replied: "My game against GM Boyce at Jersey 2004."

His best individual achievement was a victory at Pardubice 1993.

Greenfeld was awarded the International Master (IM) title in 1983, and the GM title in 1989.