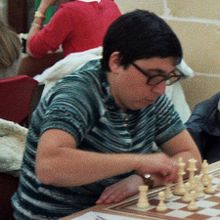 She is best known for winning the ICCF Women's World Championship in correspondence chess on two occasions: between 1978 and 1984, and between 1993 and 1998.

She grew up in Leningrad (now St. Petersburg), and since 1976 has lived in Israel. Kristol is the four-time OTB women's chess champion of Israel.

In 1989 Kristol participated in a zonal tournament in Haifa, and shared 1st-2nd place.

Major tournaments that Kristol participated in