Vladas Mikėnas (17 April 1910 - 3 November 1992) was a Lithuanian International Master of chess, an Honorary Grandmaster, and a journalist.

Vladas Mikėnas played for Lithuania at first board in five official and one unofficial Chess Olympiads. 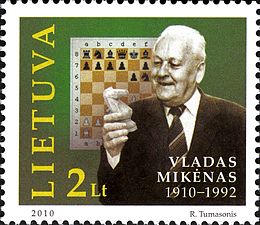 He was the arbiter of the World Championship match between Anatoly Karpov and Garry Kasparov in 1985.