The 1948 World Chess Championship was a quintuple round-robin tournament played to determine the new World Chess Champion following the death of the previous champion Alexander Alekhine in 1946. The tournament marked the passing of control of the championship title to FIDE, the International Chess Federation which had been formed in 1924. Mikhail Botvinnik won the five-player championship tournament, beginning the era of Soviet domination of international chess that would last over twenty years without interruption.

Previously, a new World Champion had won the title by defeating the former champion in a match. Alekhine's death created an interregnum (gap between reigns) that made the normal procedure impossible. The situation was very confused, with many respected players and commentators offering different solutions. FIDE found it very difficult to organise the early discussions on how to resolve the interregnum because problems with money and travel so soon after the end of World War II prevented many countries from sending representatives - most notably the Soviet Union. The shortage of clear information resulted in otherwise responsible magazines publishing rumors and speculation, which only made the situation more confused. See Interregnum of World Chess Champions for more details.

The eventual solution was very similar to FIDE's initial proposal and to a proposal put forward by the Soviet Union. The 1938 AVRO tournament was used as the basis for the 1948 Championship Tournament. The AVRO tournament had brought together the eight players who were, by general acclamation, the best players in the world at the time. Two of the participants at AVRO - Alekhine and former world champion José Raúl Capablanca - had died; but FIDE decided that the other six participants at AVRO would play a quadruple round robin tournament. These players were: Max Euwe (from the Netherlands); Mikhail Botvinnik, Paul Keres and Salo Flohr (from the Soviet Union); and Reuben Fine and Samuel Reshevsky (from the USA).

The proposal was modified slightly, in that the Soviet Union was allowed to replace Flohr with Vasily Smyslov, a young player who had emerged during the war years and was obviously stronger. Reuben Fine elected not to play, for reasons which are not totally clear (see 1948 World Championship). There was a proposal that he should be replaced with Miguel Najdorf, but in the end the tournament was played with only five players, and as a five-cycle round robin. 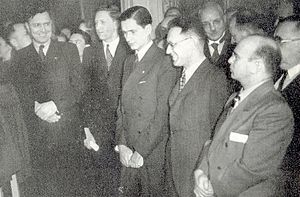 Before the tournament, Botvinnik was considered the favourite because of his victory at Groningen 1946 and his pre-war results. Keres and Reshevsky were veterans of international competition. Although Euwe was the former world champion, he had played poorly since Groningen. Smyslov was not well known in the West, as he had only appeared in two international competitions: a third-place finish at Groningen and shared second at Warsaw 1947.

The Soviets brought a large contingent of about twenty-one including the players Botvinnik, Keres, and Smyslov; their seconds Viacheslav Ragozin, Alexander Tolush, and Vladimir Alatortsev respectively; correspondents Igor Bondarevsky, Salo Flohr, and Andor Lilienthal; member of the adjudication committee Alexander Kotov; leader of the group Postnikov; a private doctor from Moscow; and Botvinnik's wife and young daughter. The U.S. delegation numbered one person - Reshevsky traveled alone and Lodewijk Prins was obtained at the last moment to be his second. Theo van Scheltinga served as Euwe's second.

Botvinnik became the sixth World Chess Champion by winning the tournament convincingly with 14 points out of 20. He also had a plus score against all the other players. Smyslov came second with 11 points, just ahead of Keres and Reshevsky on 10½. Former champion Euwe was in bad form, and finished last with 4 out of 20.

Since Keres lost his first four games against Botvinnik, suspicions are sometimes raised that Keres was forced to "throw" games to allow Botvinnik to win the Championship. Chess historian Taylor Kingston investigated all the available evidence and arguments, and concluded that Soviet chess officials gave Keres strong hints that he should not hinder Botvinnik's attempt to win the World Championship; Botvinnik only discovered this about half-way through the tournament and protested so strongly that he angered Soviet officials. Keres probably did not deliberately lose games to Botvinnik or anyone else in the tournament.