Svetozar Gligorić (Serbian: Светозар Глигорић, 2 February 1923 - 14 August 2012) was a Serbian and Yugoslavian chess grandmaster. He won the championship of Yugoslavia a record twelve times, and is considered the best player ever from Serbia. In 1958 he was declared the best athlete of Yugoslavia.

In the 1950s and 1960s Gligorić was one of the top players in the world, and also among the world's most popular, owing to his globe-trotting tournament schedule and a particularly engaging personality, reflected in the title of his autobiography, I Play Against Pieces. (I.e., playing without hostility toward the opponent, or playing differently against different players for "psychological" reasons; playing the board and not the man.)

Gligorić was born in Belgrade to a poor family. According to his recollections, his first exposure to chess was as a small child watching patrons play in a neighborhood bar. He began to play at the age of eleven, when taught by a boarder taken in by his mother (his father had died by this time). Lacking a chess set, he made one for himself by carving pieces from corks from wine bottles - a story paralleling the formative years of his contemporary, the renowned Estonian grandmaster Paul Keres.

Gligorić was a good student during his youth, with both academic and athletic successes that famously led to him to be invited to represent his school at a birthday celebration for Prince Peter, who later became King Peter II of Yugoslavia. He later recounted to International Master David Levy (who chronicled his chess career in The Chess of Gligoric) his distress at attending this gala event wearing poor clothing stemming from his family's impoverished condition. His first tournament success came in 1938 when he won the Belgrade Chess Club championship; however, World War II interrupted his chess progress for a time. During the war, Gligorić was a member of a partisan unit. A chance encounter with a chess-playing partisan officer led to his removal from combat.

Following World War II, Gligorić worked for several years as a journalist and organizer of chess tournaments. He continued to progress as a player and was awarded the International Master (IM) title in 1950 and the Grandmaster (GM) title in 1951, eventually making the transition to full-time chess professional. He continued active tournament play well into his sixties. 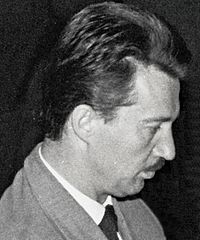 He represented his native Yugoslavia with great success in fifteen Chess Olympiads from 1950 to 1982 (thirteen times on first board), playing 223 games (+88 −26 =109). In the first post-war Olympiad, on home soil at Dubrovnik 1950, Gligoric played on first board and led Yugoslavia to a historic result, the team gold medal. The Yugoslav team was usually second or third in the world during the 1950s.

His record in world championship qualifying events was mixed. He was a regular competitor in Zonal and Interzonal competitions with several successes, e.g. zonal wins in 1951, 1960 (joint), 1963, 1966, and 1969 (joint) and finishes at the Interzonals of 1952, 1958 and 1967 high enough to qualify him for the final Candidates events the following years. However, he was not as successful in any of the Candidates events, with mediocre results in the 1953 and 1959 Candidates Tournaments and a match loss to Mikhail Tal in the 1968 Candidates match series.

As a commentator, Gligorić was able to take advantage of his fluency in a number of languages and his training as a journalist, to produce lucid, interesting game annotations. He was a regular columnist for Chess Review and Chess Life magazines for many years, his "Game of the Month" column often amounting to a complete tutorial in the opening used in the feature game as well as a set of comprehensive game annotations. He wrote a number of chess books in several languages. One of the most notable was Fischer v Spassky: The Chess Match of the Century, a detailed account of their epic struggle for the world title in Reykjavík in 1972. He also contributed regularly to the Chess Informant semi-annual (more recently, thrice-yearly) compilation of the world's most important chess games.

One of Gligorić's most famous games was this win against the former World Champion Tigran Petrosian at the great "Tournament of Peace" held in Zagreb in 1970. It displays Gligorić's virtuosity on the Black side of the King's Indian and his willingness to play for a sacrificial attack against one of history's greatest defenders. Zagreb 1970 was another Gligorić tournament success, as he tied for second (with Petrosian and others) behind Fischer, at the start of the latter's 1970-71 run of tournament and match victories.

Indeed, Gligorić was the first person to inflict a defeat on Petrosian after he won the world title from Mikhail Botvinnik in 1963.