Benko was born in Amiens, France, but was raised in Hungary. He was Hungarian champion by age 20. He emigrated to the United States in 1958, after defecting following the World Student Team Championship in Reykjavík, Iceland in 1957. FIDE awarded him the Grandmaster title in 1958.

Benko's highest achievement was qualifying and competing in the Candidates Tournament - the tournament to decide the challenger for the World Championship - in 1959 and 1962. Both tournaments had eight of the world's top players. He finished eighth in 1959 and sixth in 1962.

Benko qualified for the 1970 Interzonal tournament, the leaders of which advance to the Candidates. However, he gave up his spot in the Interzonal to Bobby Fischer, who went on to win the World Championship in 1972.

Benko played some of his very best chess in team competition. He represented Hungary at the 1957 Student Olympiad in Reykjavík on board one, scoring 7½/12, and Hungary was fourth as a team. He had earlier played for the national Hungarian team at the Moscow 1956 Olympiad, on board three, scoring 10/15, and helping Hungary to team bronze. He moved to the United States, but it was not until 1962 that he appeared on the U.S. team. He would wind up on six teams in a row. At Varna 1962, Benko played board two, scored 8/12 for the silver medal on his board, and the USA finished fourth. At Tel Aviv 1964, he was again on board two, scored 9½/14, and the USA ended up sixth. At Havana 1966, Benko was on board three, scored 8/12, and the Americans won team silver. At Lugano 1968, he made 6/12 on board three, and the USA finished fourth. At Siegen 1970, Benko was on board four, scoring 8½/12, and the Americans again finished fourth. His last Olympiad was Skopje 1972, where he played on board three, made 9½/16, and the USA ended up ninth.

Benko defeated four players who held the World Champion title at some time. They are Bobby Fischer, Mikhail Tal, Tigran Petrosian, and Vassily Smyslov. He defeated Fischer on multiple occasions. 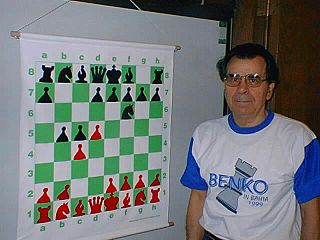 Pal Benko with the Benko Gambit position in 2005

Some chess openings he pioneered are named for him:

He wrote a book on the Benko Gambit for RHM Publishing in the early 1970s.

Benko is a noted authority on chess endgames. He had a column on endgames in Chess Life magazine, which is published by the United States Chess Federation, for decades: In the Arena (1972-81), Endgame Lab (1981-2013), and chess problem column Benko's Bafflers. In 2003 he revised the classic book Basic Chess Endings, by Reuben Fine. In addition to his success as a player, Benko is a composer of endgame studies and chess problems. He was awarded the title of International Master of Chess Composition by FIDE.

Benko was inducted into the U.S. Chess Hall of Fame in 1993.