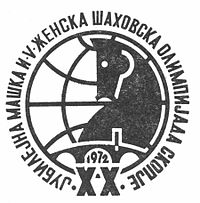 The 20th Chess Olympiad, organized by FIDE and comprising an open team tournament, as well as several other events designed to promote the game of chess, took place between September 18 and October 13, 1972, in Skopje, Yugoslavia (present-day Macedonia).

For the first time, the Soviet team only comprised 5 GMs and one IM (Savon). Since Bobby Fischer had beaten Spassky earlier in the year, the team wasn't led by the current world champion - also a first. It did, however, feature three previous (Smyslov, Tal, and Petrosian) as well as one future champion (Karpov). The team still lived up to expectations, though, and won their eleventh consecutive gold medals, with Hungary and Yugoslavia taking the silver and bronze, respectively.

Before the Soviet team could achieve a victory, there was some controversy. In the 4th round of Final Group A, the Soviets played a match against the team from Bulgaria. A game between Victor Korchnoi and Georgi Tringov was adjourned after 41 moves with Tringov to seal his next move. At this Olympiad, sealed moves were written on a separate piece of paper, not the player's score sheet. Tringov rejected this way of sealing his move and instead wrote it on his score sheet.

When the game was resumed, the arbiter opened the envelope. In the envelope was Korchnoi's score sheet but not the one belonging to Tringov. The arbiter ruled the game a forfeit win for Korchnoi. The Bulgarian team captain instituted protest proceedings but an arbitration committee upheld the arbiter's ruling.

After the Olympiad was over, it was learned that Tringov had absentmindedly placed his score sheet in his pocket. Tringov discovered his mistake several days after his forfeit but was too ashamed to admit his mistake to the organizers of the Olympiad.

In Final B, the Albanian team refused to play Israel and withdrew after round 11. Their matches were regarded as "friendlies" and didn't count in the overall standings.

Jens Enevoldsen represented Denmark at his 11th and final Olympiad, 39 years after his first appearance at Folkestone 1933. Both records at the time (although both have since been beaten by Lajos Portisch).

This Olympiad was the first major success for the Benko Gambit, named after Hungarian-American master Pal Benko. In sixteen games, Black players scored ten wins and six draws with the opening.