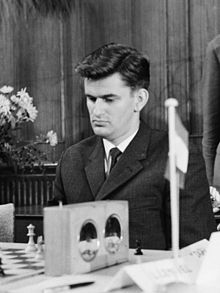 In 1951 Darga became German Junior Champion after winning the national under-20 championship. He also proved his strength as a young chessplayer by sharing first place in the World Junior Championship of 1953, with Oscar Panno of Argentina who was awarded the title on-tie-break. His best performance is held to be the 1967 Winnipeg tournament, where he also tied for first place with Bent Larsen of Denmark, whom he beat, ahead of joint Boris Spassky and Paul Keres.

He was awarded the title of International Master in 1957, and Grandmaster in 1964. He played for Germany in ten Chess Olympiads between 1954 and 1978, and also served as coach of the German national chess team. He was second reserve for the World team in the 1970 Match of the Century between the Soviet Union and the rest of the world, but did not play any actual games in the match.

His favourite openings as White were the English Opening and the Ruy Lopez. As Black he often played the Sicilian Defence.

Klaus Darga retired as a chess professional and became a computer programmer for IBM.