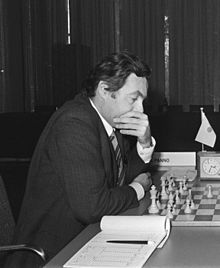 Panno won the first World Junior Chess Championship in 1953, ahead of such future strong Grandmasters as Borislav Ivkov, Bent Larsen, and Fridrik Olafsson. He also won the championship of Argentina the same year. He became a grandmaster at the age of twenty. He had an Elo rating of around 2580 in his prime, and of 2515 in 1986 and 2429 in 2008. Chessmetrics.com, which attempts to rank players from before the introduction of FIDE ratings, estimates that he was as high as 18th in the world in late 1955. He competed in five interzonal tournaments, with his greatest success coming at Göteborg 1955. In a field of 21 players, Panno finished clear third, only half a point out of second and ahead of such players as Efim Geller, Tigran Petrosian, and Boris Spassky. (He beat future World Champion Spassky in their individual game.) This result was probably the peak of his career, as it advanced him to the 1956 Candidates tournament in Amsterdam, the winner of which would play a 24 game match for the World Championship with Mikhail Botvinnik. However, his form from the interzonal did not carry over and he finished in a tie for 8th-9th in a ten man field. Panno has several successes at the tournaments at Mar del Plata. He won the international tournaments in 1954 and 1969 (shared with Miguel Najdorf), and the open tournaments in 1986, 1988, and 1994. Panno tied for first at Lone Pine 1977. He played various famous grandmasters, occasionally losing to them. Panno was the first top world chess player born in South America. He played eleven times for Argentina in Chess Olympiads (1954-58, 1962, 1966-70, 1976, 1986-88, 1992). The 1954 Olympiad team won the Silver medal, while the 1958 and 1962 teams won the Bronze medal. He was still active as of 2008, finishing third in the Bobby Fischer Memorial tournament held in Villa Martelli. In addition to his win over Boris Spassky in 1955, he also beat him at the 1976 Manila interzonal.