Wolfgang Uhlmann (born 29 March 1935) is a prominent German International Grandmaster of chess. Despite being a dedicated professional chess player, and undoubtedly the GDR's most successful ever, he has also had a career in accountancy.

Uhlmann's father taught him the game at the age of eleven at their home in Dresden and he progressed to the title of German Youth Champion in 1951. By 1956 he was an International Master and by 1959, a Grandmaster.

He quickly established himself as the dominant force in East German chess, winning the GDR (German Democratic Republic, or East German) national championship on eleven occasions from 1954 to 1986. The number eleven repeated again, when as the GDR's most outstanding player at the Chess Olympiads of 1956-90, he made eleven appearances, mostly on top board. At the 1964 event in Tel Aviv, he scored 83.3 percent, earning him the individual board one gold medal. An individual bronze medal followed in 1966 at Havana. 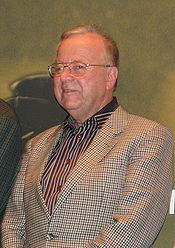 His most promising attempt at World Championship qualification occurred at the Palma de Mallorca Interzonal of 1970, where he tied for fifth and sixth place and reached the Candidates Matches held the following year. But his quarter-final match with Bent Larsen in Las Palmas ended in disappointment, a 5½-3½ victory for Larsen, and Uhlmann was not able to come so close again.

In 2012, and at the age of 77, Uhlmann was a member of the "old Hands" team (a group of aging previous top players) facing the "Snowdrops" (extremely talented young females) in a display match. Uhlmann demonstrated a very vivid style of chess, reminiscent of his glory days. Especially the game Kashlinskaya-Uhlmann was considered the most beautiful of the event - the multiple East German Champion, it was said, played it like the young Mihail Tal.

Uhlmann is acknowledged as one of the world's leading experts on the French Defence, having refined and improved many of its variations and authored books on the opening. He is one of very few Grandmasters to have deployed the French almost exclusively in reply to 1.e4.

Black now sacrifices a piece to establish a fatal pin on the long light-square diagonal.