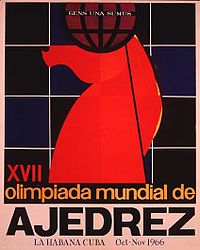 The official poster for the Olympiad.

The 17th Chess Olympiad, organized by FIDE and comprising an open team tournament, as well as several other events designed to promote the game of chess, took place between October 23 and November 20, 1966, in Havana, Cuba.

The Soviet team with 6 GMs, led by world champion Petrosian, lived up to expectations and won their eighth consecutive gold medals, with the United States and Hungary taking the silver and bronze, respectively.

Ex-champion Tal was beaten up in a bar shortly before the Olympiad and missed the first five rounds due to his injuries.

When Hungary and Yugoslavia tied on both game and match points, and they had drawn 2-2 with each other, the rules dictated that the final ranking would be decided by using the Neustadtl score - but not which version of it. A socalled unweighted score was used, which placed Hungary ahead of Yugoslavia, giving them the bronze medals. Had the weighted variant been used instead, the result would have been the other way around.

A total of 52 teams entered the competition and were divided into seven preliminary groups of seven or eight teams each. The top two from each group advanced to Final A, the teams placed 3rd-4th to Final B, no. 5-6 to Final C, and the rest to Final D. All preliminary groups and finals were played as round-robin tournaments. The preliminary results were as follows: