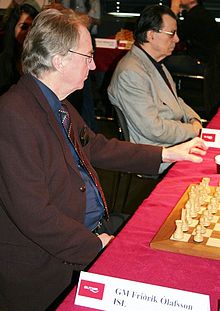 Friðrik was born in Reykjavík, Iceland. A first-time winner of the Icelandic Chess Championship in 1952 and of the Nordic Chess Championship a year later, he rapidly became recognised as the strongest Icelandic player of his generation. Friðrik's first result of international note was his shared first with Viktor Korchnoi at Hastings 1955-56.

Friðrik's best result in World Chess Championship competition was in the 1958 Interzonal tournament at Portorož, where he finished equal 5th-6th, automatically earning the grandmaster title and qualifying for the 1959 Candidates Tournament (the last stage to determine the challenger to the World Chess Champion) in 1960. In the event, held at Bled, Zagreb and Belgrade, however, he finished seventh of eight with 10/28. He also played in the following Interzonal (Stockholm 1962) but failed to qualify for the Candidates. Among his best tournament results were joint third in the first Piatigorsky Cup, Los Angeles 1963, with 7½/14 and shared first with Ljubomir Ljubojević at Wijk aan Zee 1976, ahead of Mikhail Tal.

In 1978, he succeeded Max Euwe as President of the international chess governing body FIDE. During the tenure he presided over the 1981 Karpov-Korchnoi World Championship match. Since Korchnoi defected from the Soviet Union in 1976, the Soviets were holding Korchnoi's son, Igor. Olafsson delayed the planned September 19 start date of the match in a bid to get the Soviets to release Victor's son. For this attempt, Olafsson drew the wrath of the Soviets, who then backed the FIDE Vice-President, Florencio Campomanes for Presidency of FIDE. After losing the election in 1982, Olafsson was appointed Secretary to the Icelandic Parliament. Friðrik continued to play occasionally into the 21st century, winning a rapid match against fellow veteran Bent Larsen in 2003 by a score of 5-3.

In life outside of chess, he is married and has two adult daughters. Prior to 1974 when he became a chess professional, he worked as a lawyer at the Icelandic Ministry of Justice.