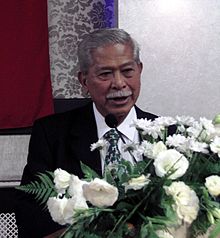 Campomanes was born in Manila and earned his B.A. in political science from the University of the Philippines in 1948. Then, he studied at Brown University (Providence, Rhode Island), where he earned his M.A. in 1951. He undertook doctoral studies at Georgetown University, Washington, D.C., from 1949 to 1954.

As a chess player

Campomanes was a National Master strength player during his peak years, and was Philippine national champion on two occasions (1956, 1960). He represented his country at five Chess Olympiads: Moscow 1956, Munich 1958, Leipzig 1960, Varna 1962, and Havana 1966. He met some distinguished opposition as a result, losing games against Pal Benko and Ludek Pachman at Moscow 1956, Oscar Panno at Munich 1958, Mikhail Tal and Miguel Najdorf at Leipzig 1960, and Lev Polugaevsky at Havana 1966.

Campomanes became involved in FIDE as a national delegate, and worked his way into prominence in Asian chess organization. Campomanes often boasted that he was close to the former Philippine president Ferdinand Marcos. Campomanes helped organize the World Chess Championship match held in 1978 at Baguio, Philippines, between Anatoly Karpov and Viktor Korchnoi.

Campomanes is best remembered as the President of FIDE, to which post he was elected in 1982, and held until 1995, through several controversies, most notably the abandonment of the 1984-85 match between Karpov and Garry Kasparov without result, after 48 games, and the break-away from FIDE of the Professional Chess Association in 1993. The cancellation threw the international chess calendar into disarray for the next several years, since a series of matches had to be held to resolve the matter, and these affected other qualifying events.

The membership of FIDE grew by about fifty member nations during his tenure as president. Campomanes was succeeded in 1995 by Kirsan Ilyumzhinov. He was appointed FIDE Honorary President, and was often present at significant international competitions such as zonal and continental championships, chess olympiads, and world chess championships.

Campomanes remains the only Filipino to ever hold the presidency of FIDE, which is based in Lausanne, Switzerland.

According to the book The KGB Plays Chess (Boris Gulko, Korchnoi, Vladimir Popow and Juri Felschtinski), Campomanes, then Vice-President of FIDE, was recruited as an asset by the KGB in exchange for Soviet support for his candidacy as FIDE President. As FIDE President, Campomanes helped Karpov maintain the world title at all possible costs. "At the same time USSR Chess Federation President, Vitaly Vitaly Sevastianov turned to Campomanes. With the signature of deputy chairman of the KGB Philipp Bobkov a proposal was finally sent to the Central Committee of the Communist Party of the Soviet Union to terminate the match and start again with a 0-0 score. The intention was to avoid the impression that the decision favoured Karpov. But mainly people did not want to displease Kasparov's powerful patron Gaidar Alijev. The Central Committee supported the proposal of the KGB and Campomanes terminated the match." More commonly known is the quote following the press conference which terminated the match, overheard by ESPN microphones, reported in Chess Life by witness Maxim Dlugy and Sports Illustrated: "But Anatoly, I told them just what you said".

On 5 February 2003, the Philippine anti-graft court Sandiganbayan convicted Campomanes for failure to account for the Philippine Sports Commission (PSC) government funds amounting to PhP12.876 million (or US$238,746 at an exchange rate of PhP53.932 = $1). The PSC entrusted these funds to the FIDE for the World Chess Olympiad in Manila, hosted by the Philippine government from 6 to 25 June 1992. Subsequently, Florencio Campomanes was sentenced to one year and 10 months imprisonment, later reduced to a PhP6000 fine in December 2006, .

The charges against Campomanes were overturned based upon a technicality. There was never any resolution as to the disposition of the 12.876 million pesos mentioned above. The rationale for the reversal was that the Supreme Court of the Philippines decided that Campomanes was not a government official to whom the anti-graft laws applied. Thus as a non-government official, Campomanes had no duty under the law to render an accounting of the missing funds.

In early February 2007, Florencio Campomanes suffered injuries from a car accident which resulted in time in an intensive care unit.

On 3 May 2010, Campomanes died in the Philippines.

Curriculum vitae of Florencio B. Campomanes