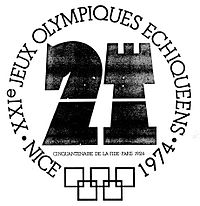 The 21st Chess Olympiad, organized by FIDE and comprising an open team tournament, as well as several other events designed to promote the game of chess, took place between June 6 and June 30, 1974, in Nice, France.

Bobby Fischer was still the reigning World Champion, but had not played a single game of tournament chess since he won the title in 1972 and was not present in Nice either. However, the American team still managed to secure third place in his absence.

For the same reason, for the second time in a row, the Soviet team was not led by the current world champion. It did, however, feature three previous (Tal, Petrosian, and Spassky) as well as one future champion (Karpov). The team won by 8½ points, the biggest victory margin yet, and took home their twelfth consecutive gold medals, with Yugoslavia and the United States taking the silver and bronze, respectively.

With a complete lack of tension in the championship race, the tournament had more than its share of political tension. In Final B, the Tunisian team refused to play Israel, so the score was computed according to ELO ratings as a 3-1 win for the Israeli team.

Due to their apartheid policies, both South Africa and Rhodesia were expelled from FIDE with three rounds to go. The South African team withdrew from the tournament themselves, and their results in Final C were not counted in the overall standings. FIDE president Max Euwe tried unsuccessfully to have Rhodesia thrown out as well, but in the end they were allowed to finish the tournament and won Final E - helped by default victories against Iraq and Algeria who refused to play them.

A total of 74 teams were divided into eight preliminary groups of nine or ten teams each, from which the top two advanced to Final A, no. 3-4 to Final B etc. Preliminary head-to-head results were carried over to the finals, so no team met any other team more than once. All preliminary groups and finals were played as round-robin tournaments. The results were as follows:

Only two players from Nicaragua showed up in Nice, so the team had to forfeit their first match against Chile and subsequently withdrew from the tournament. Their single result was not counted in the group standings.