William James Lombardy (born December 4, 1937) is an American chess grandmaster, chess writer, teacher, and a former Catholic priest. He was one of the leading American chess players during the 1950s and 1960s, and a contemporary of Bobby Fischer, whom he coached from the time Fischer was aged 11½ through the World Chess Championship 1972. Lombardy led the U.S. Student Team to Gold in the 1960 World Student Team Championship in Leningrad. He was the only World Junior Champion to win with a perfect score.

Lombardy received his B.A. in Philosophy, an M.A. in Ethics, and an M.Div., all from Saint Joseph's Seminary (Dunwoodie). He attended CUNY, and studied Educational Psychology at Saint Louis University.

Lombardy grew up at 838 Beck Street, Bronx, New York City, in an apartment with his parents and two other families. "Bill recalls that his family had financial problems when he was young. His parents both worked and they all shared an apartment with his grandmother, an aunt and a cousin, until his second year in grammar school, when they moved to their own apartment." Shortly after World War II, Lombardy and his family moved to 961 Faile Street, Lombardy recalled of his new apartment:

I remember the winters were very tough in that apartment. My room used to sweat from the cold. The moisture used to seep through one wall. I used to have to get extra blankets to cover me at night so I wouldn't wake up with pneumonia in the morning.

It was at his new home that Lombardy became friends with an Orthodox Jewish boy, named Eddie Garlerter, who taught Lombardy how to play chess. When Lombardy was about 10 he went to Lion's Square Den Park to play stronger chess players. It was there that a kind, old, Jewish man gave Lombardy a booklet "that would change [his] life." Lombardy elaborated on this:

He took out a marble design notebook from a brown paper bag. "Here," he said, "I'm finished with it." I thanked him for the book, put it in the bag and played chess with the man. When I got home, I looked at my book... Back in those days, there were five or six newspapers that carried a chess column. Over many, many years the old man had studiously pasted some two thousand of those chess clippings into his book. I had never asked him whether he had actually played over the games in those clippings. I was about to do what he himself may not entirely have done.

Lombardy did not become a member of the Marshall Chess Club until several years later (at the age of 14), when he started to get serious about his chess playing.

According to Jack Collins, "Bill's chess ability developed rapidly." Lombardy won the 1954 New York State Championship with a score of 7/11 (+7-0=4), and tied for first with Larry Evans at the 1956 Canadian Open Chess Championship. He then played and lost a match versus grandmaster Samuel Reshevsky by the score of 3½-2½, and, in the same year, played second board for the World Student Team Championship in Uppsala, Sweden, going undefeated, and scoring 7/9.

In 1957, Lombardy became the first American to win the World Junior Chess Championship. He won the tournament in Toronto with a perfect score of 11-0, a record that "still stands today". His performance at Toronto was "the first time an individual world title had been won by an American since the distant days (1837-84) of Paul Morphy". Based on his performance, he was automatically awarded the International Master title.

In 1958, he played in the Mar del Plata tournament and went "undefeated in second place", scoring 11/15.

In 1960, he was awarded the title of International Grandmaster.

He finished second in the 1960-61 U.S. Championship behind Bobby Fischer and ahead of Raymond Weinstein in a star-studded field. With this result, Lombardy qualified to compete in the Interzonal tournament to be held in Stockholm for the right to advance to a match for the world championship. However, Lombardy decided to retire from tournament competition and become a Roman Catholic priest. Before retiring, he lost a match to Larry Evans by the score of 5½-4½. At the 1961 Zurich Chess Tournament, Lombardy tied for fourth place with Svetozar Gligorić, scoring 6.5/11

In 1965, Lombardy tied with Robert Byrne for first at the Western Open in St. Louis, and shared first place with Pal Benko at the USA Open Championship in Puerto Rico.

In 1966, Lombardy took clear first at the Southern Open in Atlanta, and tied with Ivkov for second at the Canadian Open.

In 1976, Lombardy was on the U.S. team that won a Gold medal at the 22nd Chess Olympiad in Haifa.

In 1971, Lombardy gave a simultaneous exhibition and lecture at the U.S. Military Academy at West Point.

Lombardy tied for first with Pal Benko in The USA Open Championship in Lincoln, Nebraska in 1975.

In 1974, Lombardy tied for second in The USA Open Championship, with 9.5/12, going undefeated.

Lombardy tied for fifth-sixth place with 6/9 in The Lone Pine Open in 1977.

In 1979 Lombardy equaled his score in the same event, tying for fifth-tenth, and winning an upset against tournament favorite (and then World Number 2 player) Victor Korchnoi.

In 1978 and 1979, Lombardy served as the lead instructor at an "all day", week-long chess camp at Michigan State University. This was perhaps the first camp of its type in the United States and attracted juniors from all over the country.

In the early 1980s, Lombardy left the active ministry, subsequently married and had a son.

In November 2011 Lombardy self-published his autobiographical game collection: Understanding Chess: My System, My Games, My Life. The book is available through his website: .

He is currently retired from chess and lives in the East Village of New York City, where he focuses on his writing and offers chess lessons by appointment. 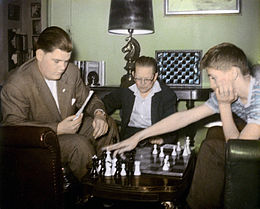 Since Bobby, when I first met him at age 11½...stated that he would be world chess champion, I believed it was my job as his friend and confidant to do everything legitimately in my power to ensure that the young player's dream would come true!...I voluntarily served as Bobby's coach and second at the 1958 Portoroz Interzonal, when Bobby, at age 15, qualified for the world championship candidates' tournament and thus became the youngest Grandmaster ever.

Lombardy would serve as a central figure in Fischer's ascension to the chess throne.

Fischer was scheduled to play a match against Spassky for the World Chess Championship 1972. However, Fischer had a falling out with Larry Evans, who had been Fischer's second in his successful matches against Bent Larsen and Tigran Petrosian.

At the last minute, Fischer called upon Lombardy to help him with the match. Although Lombardy was still a priest, he was allowed to take time off from the priesthood to go to Reykjavík, Iceland to serve as the official second to Fischer during the World Chess Championship 1972, between Fischer and Spassky. Lombardy says of the event:

Suffice to say, I was the only person on the intimate inside during that Match of the Century...let me point out that there were 14 adjourned games. Bobby [Fischer] and I worked together on those adjourned positions without making a single technical error!... For little remuneration, I dedicated my services in the Icelandic capital to guarantee that Bobby followed through and finished the match victoriously.

The assertion that Lombardy was essential to keeping Fischer in the match seems to be confirmed by other chess writers and persons in attendance.