Eugenio Torre (born November 4, 1951) is a chess grandmaster (GM). He is considered the strongest chess player the Philippines produced during the 1980s and 1990s. Board 1 player of the Philippines in eighteen World Chess Olympiads. In 1974, then twenty-two years old, he became Asia's first Grandmaster by winning the silver medal in the Chess Olympiad held in Nice, France. In a tournament in Manila in the 1976, Torre beat then reigning world chess champion Anatoly Karpov in a game that has become part of Filipino chess history. In 1982 he earned a spot in the World Candidates Chess Championships, where he faced the legendary Zoltan Ribli. His ELO rating reached 2602 in 1985 and in 1986 Torre was ranked 40th in the world with an ELO Rating of 2619. He served as Fischer's second in the 1992 World championship against Boris Spassky in Yugoslavia. Torre is still performing consistently as of present by winning the 2008 Pres. Gloria Macapagal Arroyo Cup, an international chess tournament. 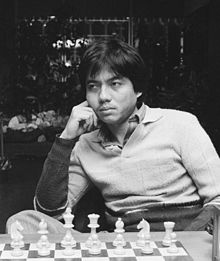 Torre shot to prominence in 1976 as a possible future title challenger after winning a strong four-man tournament in Manila ahead of world champion Anatoly Karpov - thus becoming the first player to finish ahead of Karpov in a tournament since the latter became world champion. "In the summer of 1976, three grandmasters traveled to Manila, Philippines to participate in the Marlboro-Loyola Kings Challenge chess tournament. They were (in order of Elo): World Champion Anatoly Karpov (2695) from the Soviet Union, Ljubomir Ljubojevic (2620) from Yugoslavia, and Walter Shawn Browne (2585) from the United States. They were joined by grandmaster Eugenio Torre (2505) from the Philippines for a double-round robin event. The average rating of the players qualified the tournament as a category XV event.

The result was surprising and momentous due to the inspired play of Torre. Not only did he defeat the world champion in the second round, but he went on to finish clear first ahead of Karpov, a feat no one had yet accomplished since the latter had become World Champion. His success in the tournament earned Torre a place in history. The final standings and crosstable are as follows:

The high point of his career came in the early 1980s when he was ranked world No.17; successfully going on to qualify as a candidate for the world championship after tying for first with Lajos Portisch during the 1982 Toluca Interzonal.

Torre has the distinction of being the first Asian player to earn the title of International Grandmaster. He qualified for the Candidates Matches for the 1984 World Championship. In that preliminary stage, the contenders play matches against each other to determine who will challenge the world champion. Torre was eliminated when he lost his match against Zoltán Ribli by a score of 6-4.

After losing his quarterfinal candidates match to Ribli in 1983, Torre became disillusioned with chess and more or less went into semi-retirement. He went on to become a minor celebrity due to his daily one hour TV programme Chess Today.

From 1970 to 2010, the former business administration undergraduate from Mapúa Institute of Technology donned the national colors 20 times in the World Chess Olympiad, 19 of which were consecutively, to break the old record of 18 consecutive held by Heikki Westerinen. His 20 non-consecutive appearances tied the record set by Hungary's Lajos Portisch. During that 40-year period, he manned the top board for Team Philippines a record 17 times except in the 1970 (Siegen, Germany), 2006 (Turin, Italy) and 2010 (Khanty-Mansiysk, Russia) editions. In that stretch, Torre had played in 236 games winning 86, drawing 111 and losing 39 games for a grand total of 141½ points. The high point of his Olympiad career was winning the Bronze Medal thrice in the Individual Standings in Board 1, at the 21st Chess Olympiad (1974 Nice, France) where he went undefeated in 19 games (nine wins and ten draws) for a total of 14 points for a 73.7% performance rating; 24th Chess Olympiad (1980 Valletta, Malta) where he scored 11 points in 14 games (nine wins, four draws, and one loss) for a performance rating of 78.6% and lastly in the 27th Chess Olympiad (1986 Dubai, UAE) where he garnered 9½ points in 13 games (seven wins, five draws, and one loss) with a 73.1% performance rating.

At the 39th Chess Olympiad held at Khanty-Mansiysk in 2010, Torre manned Board 4 for the Philippines and played 7 games where he scored 4.5 points with 3 wins, 3 draws and 1 loss with a performance rating of 2460. In 2012, Torre participated in his record 21st Olympiad appearance at the 40th Chess Olympiad breaking his tie with Lajos Portisch held at Istanbul, Turkey. He manned Board 3 in this edition of the Olympiad. He scored 3.5 points in 7 games on the strength of 2 wins, 3 draws and 2 losses. He recorded a very high performance rating of 2611 in this Olympiad. In 2014, Torre again manned Board 3 for Team Philippines in the Tromso Olympiad for his record-setting 22nd appearance in the said tournament. He scored 5.5 points in 9 games posting 3 wins, 5 draws against a solitary loss. He recorded a performance rating of 2527 and gained 9.9 ELO points in the said Olympiad.

In 2002 and 2004, Torre manned the top board once again for Team Philippines in the 13th and 14th editions of the Asian Cities Chess Championships. The 13th edition was held at Aden, Yemen and Torre scored 5½ points in nine games on the strength of three wins, five draws and one loss while Manila, Philippines hosted the 14th edition where he scored 5 points in eight games (four wins, two draws, and two losses).

In the 16th Asian Games, Torre helped the Philippines finished second behind China, beating the Indian team in the semifinals to secure the silver medal.

He also played Board 3 in the World Student Chess Team Championships in 1969 although he lost his one and only game in the said tournament.

In 2006, Torre participated in the 2nd San Marino International Chess Open where he tied for fourth through eleventh places with 6½ points in nine rounds where he eventually placed seventh after the tie-breaks becoming the highest-placed Filipino in the said tournament. He had a performance rating of 2612 at the said tournament and won €1,000 for his seventh-place finish.

In 2010, Torre competed in the 3rd Calgary International Chess Championships held at Alberta, Canada where he flashed his vintage form by finishing in a tie for second through fourth places on the strength of four wins, four draws and a solitary loss against GM Victor Mikhalevski, the tournament top seed with ELO Rating of 2614. Torre had an ELO Rating of 2506 during the said tournament.

In 2011, Torre joined two prestigious international chess championships in the Philippines, the Asian Zone 3.3 Chess Championships and the 2nd Chairman Prospero A. Pichay, Jr. Cup International Open Chess Championships. He finished in a tie for 15th-21st places in the Asian Zonals eventually placing 18th after tiebreaks (5 points out of nine games on four wins, three losses, and two draws). It was a poor finish for Torre as he had a four-game winning streak from rounds 2 to 5 after an opening round loss to FM Haridas Pascua to take the lead after five rounds but faltered in the last four rounds where he scored only 1 point (two draws and two losses). He had a low performance rating of 2344 in this tournament. In the 2nd Pichay Cup, he improved a little bit by scoring 6½ points in 10 games to finish in a tie for 11th-18th places eventually finishing in 14th place (four wins, five draws, and one loss). This is another heartbreaker as he was stalled by five draws despite losing only one game to Chinese Lu Shanglei. In this tournament he had a performance rating of 2496.

In June 2014, Torre won the prestigious National Chess Championships - Battle of GMs held at the function room of the Philippine Sports Commission in Vito Cruz, Manila. In so doing, Torre became the oldest Filipino chess player to win a national championships at the age of 62 by scoring 23 points under the Pichay-Torre system or 4.5 points under the standard system. He won the title via tiebreak over fellow GM John Paul Gomez. The tournament also served as the qualifying tournament for the 2014 Olympiad to be held in Tromso, Norway in August. This is Torre's record 22nd appearance in the Olympiad.

Torre was a friend of Bobby Fischer. He worked on Fischer's team in his 1992 rematch with Boris Spassky in Yugoslavia. Much later, Torre conducted interviews on dzRH MBC Sports Center,a Filipino radio with Bobby Fischer. Those interviews gained notoriety for Fischer and despair for his fans. Torre was involved in 1996 when Fischer Random Chess was launched. One anecdote during this period has it that when Torre and Fischer boarded a taxi in Buenos Aires, the driver immediately recognized Torre as a chess player. As both were about to leave the taxi, the driver, not knowing who the other distinguished passenger was, asked Torre: "Whatever happened to that crazy guy Fischer?"

In a tournament in Manila in the 1976, Torre beat then reigning world chess champion Anatoly Karpov in a game that has become part of Filipino chess history.