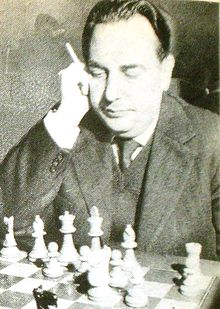 Sanguineti began his high-level tournament career at the 1954 Buenos Aires Zonal tournament in Mar del Plata, with a fine mid-place (tie for 7-9th place) finish of 10.5/20. He improved the next year, 1955, with an excellent tie for fourth place at the Argentine Championship at Buenos Aires, where he scored 12/19. Next was the very strong Buenos Aires 1955 event, which featured star Grandmasters Borislav Ivkov, Svetozar Gligorić, Herman Pilnik and Laszlo Szabo, and he could only make 7.5/17 for 13th. But he followed this up with a much better result of third at the annual Mar del Plata International of 1956, which often attracted many of the world's best players during the 1950s and 1960s. There he scored 10.5/15 (tie for 3rd-4th).

Those strong performances earned him selection to the powerful national team, which was one of the world's top teams in the 1950s and 1960s. For example, Argentina finished second and earned team silver team medals at three straight Olympiads: Dubrovnik 1950, Helsinki 1952, and Amsterdam 1954. For Moscow 1956, Sanguineti made his debut on the first reserve board, and played sensationally to win the gold medal with a score of 9/11. Argentina finished fourth.

Further fine showings followed. At Mar del Plata 1957, he scored 10.5/17 for sixth in a high-class field which included world #3 Paul Keres, beating Soviet Grandmaster Alexander Kotov. He scored 9.5/11 to win at São Paulo 1957, finishing ahead of perennial Argentine champion Miguel Najdorf. He qualified out of Rio de Janeiro 1957, the South American Zonal, for the 1958 Interzonal tournament, tying for second with 11.5/15, and again topping Najdorf, who failed to qualify. He earned the International Master (IM) title in 1957 for this result. At Mar del Plata 1958, he tied for third with 9.5/15. Then came the Argentine Championship of 1958, where his 11.5/17 earned him fourth place. In 1958, he also won the CAVP tournament in Buenos Aires.

He played for Argentina at the 1958 World Students' Olympiad at Varna on board two, scoring 6/10. The Interzonal at Portorož was next, and although he failed to qualify further, he scored respectively from the strong field, with 10/20, to place 14th out of 21. On the same trip, he played for Argentina at the 1958 Munich Olympiad, again as first reserve, and scored 9.5/15. Argentina won the team bronze medals with a third-place finish.

After a two-year break from top competition, he placed third at the 1962 Argentine Championship with 13.5/17, and tied for fourth at Mar del Plata 1962 with 8.5/15, behind visiting stars such as Lev Polugaevsky, Vasily Smyslov, and Laszlo Szabo. Playing for Argentina again at the Varna 1962 Olympiad, he enjoyed perhaps his greatest career performance, with another gold medal on board four, from a score of 13.5/16, helping his nation to a bronze medal team finish. In 1963, he won the Buenos Aires Club Argentino event with 9/11, and the next year, he was perfect at Punta del Este (Uruguay) to win there with 7/7.

The website chessmetrics.com is a database of player ratings and results throughout chess history, and endeavours to place player strengths in historical context, while compensating for the different calculation methods which have been used, as well as retrospectively rating performances which occurred before the introduction of international ratings in 1970. By January 1965, Sanguineti had reached a chessmetrics rating of 2677, good for #18 in the world. He had performed at 2699 at Varna 1962. With a 2600 performance generally denoting grandmaster standard, it seemed quite clear that Sanguineti deserved a promotion to the higher title, based upon his consistently strong results in good calibre events.

At Buenos Aires 1965, Sanguineti scored 6.5/11 to end fourth, and he won the 1965 Argentine Championship with an impressive 16/21. Mar del Plata 1965 was again very strong, with Najdorf, Leonid Stein, and Yuri Averbakh in attendance, and Sanguineti could only manage eighth place with 8.5/15. The next year at Mar del Plata he scored 7.5/15 to finish tied seventh. For the Havana 1966 Olympiad, Sanguineti was again on board four for Argentina, and performed superbly with 11/15. Argentina finished fifth.

He cut back his play over the next couple of years. He won the Argentine Championship semi-final 'C' in 1968 with 5/7 at Mar del Plata. Then, in the Championship proper, he finished second, behind Najdorf, and defeated Samuel Schweber in a playoff match, 2.5-1.5. At the Buenos Aires Open of 1968, he tied for first with 7.5/9.

He was selected again for Argentina at the Lugano 1968 Olympiad, earning a promotion to board three, where he scored well with 11.5/16.

After a break of three years from top-flight play, Sanguineti returned to action in 1971. He won the 1971 Villa Gesell Open with 4.5/6. The inaugural Pan-American Team Championship was held at Tucuman 1971, and Argentina won easily, by eight points, with a monster score of 25.5/28, as all five team members won gold medal board prizes. Sanguineti scored 5.5/6. A team event at Villa Gesell saw him post an impressive 3.5/4.

He tied for fourth at the Zárate Open of 1973 with 6.5/9. Sanguineti claimed his second Argentine Championship title in 1973 at Santa Fe with a dominant 13.5/18, two points clear of the field. He defeated Roberto Debarnot 2.5-0.5 in a playoff match.

He won the 1974 Argentine Championship with 13.5/16, for his third title. For the Nice 1974 Olympiad, he was on board two, and made 8/15. He travelled north to Canada for the Pan-American Individual Championship, Winnipeg 1974, where he came second with 12/15 behind American champion Walter Browne. An unexpected break to his streak of good play was the 1975 Buenos Aires CA tournament, where he could manage only 4.5/11. But he recovered quickly. He claimed the tournament title at the Fortaleza Zonal 1975 with 13/17, 1.5 points ahead of runner-up, countryman Miguel Quinteros. This qualified him again for the World Championship cycle. He was fourth at the 1975 Argentine Championship at Buenos Aires with 13.5/19. Then at Mar del Plata 1976, he tied for first with 11/15. In the same year he won also in Buenos Aires (Konex chess tournament).

These strong performances seemed to bode well for the 1976 Biel Interzonal, but, facing a field of 16 strong Grandmasters out of 19 opponents, including former World Champions Tigran Petrosian and Mikhail Tal, he scored a disappointing 8.5/19 for 16th place. Haifa 1976 marked his last Olympiad appearance for Argentina and he made 4.5/7 on board four.

FIDE, the World Chess Federation, awarded him the Grandmaster title in 1982. He died in Buenos Aires at age 67.

Chess databases, such as chessgames.com and chessbase.com, seem to be missing many if not most of Sanguineti's games, especially from most of his South American events. The comprehensive Olympiad database olimpbase.org has all of his games from the Olympiads which can be played through on-screen. The database mychess.com has the best selection of his games, virtually complete for his top-level events, and these can be played through on-screen. But the games that are available show that he was dangerous for virtually anyone to meet, as players such as Alexander Kotov and Robert Fischer can attest. He favoured the Closed Openings with White, but could slip in an occasional 1.e4 to keep opponents off-balance. His style could be characterized as patient and strategic. He played much of his best chess when representing Argentina, with an impressive 67/95 in seven Olympiads, for 70.5 per cent, including two gold medals for best board performances. His best years were from 1958 to 1966, when he was most active, and then again from 1971 to 1977. He seems to have been retired from serious competition since the late 1970s.