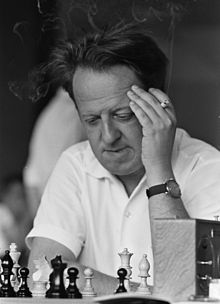 Borislav Milić (Cyrillic Борислав Милић) (20 October 1925 - 28 May 1986) was a Yugoslav Grandmaster of chess, and a chess writer, organizer, promoter, and administrator.

Born in Belgrade, Borislav Milic was part of the group of strong Yugoslav chessplayers, along with Svetozar Gligorić, Petar Trifunovic, Vasja Pirc, Braslav Rabar, Andrija Fuderer, Nikola Karaklajic, and Borislav Ivkov, which attained prominence immediately after the end of World War II. Milic was active in tournament play from 1945 to 1967. He then developed a career as a chess administrator, and as a co-founder of the very successful Chess Informant publications, serving there as a senior editor and writer.

He was selected for Yugoslav national teams in matches against the Netherlands, West Germany, USA, Switzerland, Hungary, and the Soviet Union. Milic was chosen for Yugoslav chess Olympiad teams twice, and for European Championship teams twice, winning team medals on each occasion. In 27 games, he scored (+8 =18 -1), for 69 per cent. His Olympiad and Euroteams results follow.

He was awarded the International Master title from FIDE, the World Chess Federation, in 1952, but had to wait until 1977, ten years after he had retired from top-class play, to receive the Grandmaster title, in recognition of his earlier strong performances.

Milic retired from top-class play after 1967, and served as General Secretary of the Yugoslav Chess Federation. He was one of the group of pioneering originators of the Chess Informant publications. Beginning in 1966, Chess Informant systematized opening classifications, game information, and analysis to a much deeper level of sophistication, and produced volumes of annotated games from major events involving top players, using a languageless set of symbols for worldwide appeal. Their books sold well around the world, and played a vital role in the development and popularization of chess. The Chess Informant project has been called the most important in chess publication history.

Milic also worked with the New In Chess group of publications, producing articles and openings keybooks.