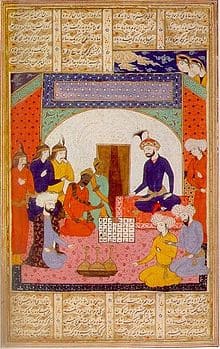 Shatranj (Hindi शतरंज, Arabic شطرنج, from Middle Persian chatrang چترنگ), is an old form of chess, which came to the Western world by the Persians and later Greeks, and ultimately from India via the Persian Empire. Modern chess gradually developed from this game.

The Arabic word shatranj is derived from the Sanskrit chaturanga (catuḥ: "four"; anga: "arm"). In Middle Persian the word appears as chatrang, with the 'u' lost due to syncope and the 'a' lost to apocope, for example, in the title of the text Mâdayân î chatrang ("Book of chess") from the 7th century AD. In Persian folk etymology shat means "100" and ranj means "worries" then it becomes "100 worries", Persian text refers to Shah Ardashir I, who ruled from 224-241, as a master of the game: "By the help of Providence Ardeshir became more victorious and warlike than all, on the polo and the riding-ground, at Chatrang and Vine-Artakhshir, and in several other arts."

However, Karnamak contains many fables and legends, and this only establishes the popularity of chatrang at the time of its composition.

During the reign of the later Sassanid king Khosrau I (531-579), a gift from an Indian king (possibly a Maukhari Dynasty king of Kannauj) included a chess game with sixteen pieces of emerald and sixteen of ruby (green vs. red). The game came with a challenge which was successfully resolved by Khosrau's courtiers. This incident, originally referred to in the Mâdayân î chatrang (c. 620 AD), is also mentioned in Firdausi's Shahnama (c. 1010).

The rules of chaturanga seen in India today have enormous variation, but all involve four branches (angas) of the army: the horse, the elephant (bishop), the chariot (rook) and the foot soldier (pawn), played on an 8x8 board. Shatranj adapted much of the same rules as chaturanga, and also the basic 16-piece structure. There is also a larger 10x11 board derivative; the 14th-century Tamerlane chess, or shatranj kamil (perfect chess), with a slightly different piece structure.

In some later variants the darker squares were engraved. The game spread Westwards after the Islamic conquest of Persia and a considerable body of literature on game tactics and strategy was produced from the 8th century onwards.

With the spread of Islam, chess diffused into the Maghreb and then to Andalusian Spain. During the Islamic conquest of India (c. 12th century), some forms came back to India as well, as evidenced in the North Indian term māt (mate, derivative from Persian māt) or the Bengali borey (pawn, presumed derived from the Arabic baidaq). Over the following centuries, chess became popular in Europe, eventually giving rise to modern chess.

The initial setup in shatranj was essentially the same as in modern chess; however, the position of the white shah (king), on the right or left side was not fixed. Either the arrangement as in modern chess or as shown in the diagram were possible. In either case, the white and black shāh would be on the same file (but not always in modern India). The game was played with these pieces:

Pieces are shown on the diagrams and recorded in the notation using the equivalent modern symbols, as in the table above. In modern descriptions of shatranj, the names king, rook, knight and pawn are commonly used for shah, rukh, faras, and baidaq.

There were also other differences compared to modern chess: Castling was not allowed (it was invented much later). Stalemating the opposing king resulted in a win for the player delivering stalemate. Capturing all one's opponent's pieces apart from the king (baring the king) was a win, unless your opponent could capture your last piece on his next move, then in most parts of the Islamic world it was a draw, but in Medina it was a win. 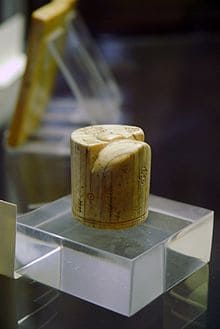 During the Golden Age of Arabic, many works on shatranj were written, recording for the first time the analysis of opening games, chess problems, the knight's tour, and many more subjects common in modern chess books. Many of these manuscripts are missing, but their content is known due to compilation work done by the later authors.

The earliest listing of works on chess is in the Fihrist, a general bibliography produced in 377 AH (988 AD) by Ibn al-Nadim. It includes an entire section on the topic of chess, listing:

There is a passage referring to chess in a work said to be by Hasan, a philosopher from Basra who died in 728 AD. The attribution of authorship is dubious, however.

Al-Adli as well as As-Suli introduced classifications of players by their playing strength. Both of them specify five classes of players:

To determine a player's class, a series or match would be undertaken with a player of a known class without odds. If the player won 7 or more games out of 10, he belonged to a higher class.

During the reign of the Arab caliphs, shatranj players of highest class were called aliyat or grandees. There were only a very few players in this category including:

Openings in shatranj were usually called tabbiyyaتَعبِّيّة (pl. tabbiyyaat),تَعبِيّات which can be translated as battle array. Due to slow piece development in shatranj, the exact sequence of moves was relatively unimportant. Instead players aimed to reach a specific position, tabiya, mostly ignoring the play of their opponent.

The works of al-Adli and as-Suli contain collections of tabiyat. Tabiyat were usually given as position on a half-board with some comments about them. The concrete sequence of moves to reach them was not specified. In his book Al-Lajlaj analyzed some tabiya in detail. He started his analysis from some given opening, for example "Double Mujannah" or "Mujannah-Mashaikhi", and then continued up to move 40, giving numerous variations.

Both al-Adli and as-Suli provided estimation of piece values in their books on shatranj. They used a monetary system to specify piece values. For example, as-Suli gives piece values in dirhem, the currency in use in his time:

The chess pieces were often shaped to avoid any representation of a real living thing.

Persian chess masters composed many shatranj problems. Such shatranj problems were called mansūba (pl. mansūbāt). This word can be translated from Arabic as arrangement, position or situation. Mansubat were typically composed in such a way that a win could be achieved as a sequence of checks. One's own king was usually threatened by immediate checkmate.

One Mansuba is the Dilaram Problem shown at the right. Black threatens immediate checkmate by 1...Ra2# or Ra8#. But White can win with a two-rook sacrifice:

Note that the alfil (bishop) moves two squares diagonally, jumping over intermediate pieces; this allows it to jump over the white knight to deliver the discovered check from the second rook with 2.Bf5+. It was said that a nobleman wagered (playing White) his wife Dilārām on a chess game, and this position arose, and she appealed "Sacrifice your two Rooks, and not me."