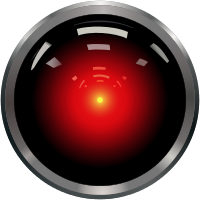 HAL, after Poole's resignation:
"Thank you for a very enjoyable game."

Poole versus HAL 9000 is a fictional chess game in the movie 2001: A Space Odyssey. In the movie, the astronaut Dr. Frank Poole is seen playing a recreational game of chess with the HAL 9000 supercomputer. Poole views the board on a computer screen, and dictates his moves orally to HAL using descriptive notation. Poole is not surprised when the supposedly infallible supercomputer soundly defeats him.

In the novel, no particular chess game is depicted, though it is mentioned that the astronauts can play chess and other games with HAL, and that, for purposes of morale, the computer is programmed to temper its superiority and win only 50% of games.

The film's director Stanley Kubrick was a passionate chess player, so unlike many chess scenes shown in other films, the position and analysis make sense. The actual game seems to come from a tournament game between A. Roesch and W. Schlage, Hamburg 1910.

The depicted game seems to be based on the moves of the following tournament game played in Hamburg, 1910:

The opening is the Ruy Lopez, Worrall Attack, followed by a pawn sacrifice by Black. Black capitalizes on an error in White's 12th move (12.d4 leads to a slight plus for White). The film shows the game from the position illustrated, with Poole (White) considering his 14th move.