Fast chess (also known as speed chess) is a type of chess game in which each side is given less time to make their moves than under the normal tournament time controls of 60 to 180 minutes per player. 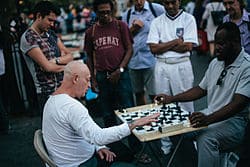 More recently in November 2015, Oleg Skvortsov and Christian Issler on behalf of the Zurich Chess Club have petitioned FIDE to allow the rating of 40 minute games as classical chess (instead of the current Rapid classification), but there was no response. Currently, for master-level players the regulations state that 120 minutes per player (based on a 60-move game) must be allocated for a game to be rated on the "classical" list.

The terms blitz or blitzkrieg in chess sometimes means a quick attack on the f7 or f2 square early in the game, putting the king in check. This term is not limited to fast chess.

A variant of blitz chess with one to three minutes per side. Common time controls for this setting is 2 minutes with one-second increment or 1 minute with a two-second increment. The term "Lightning" can also be applied to this variant.

Bullet chess is an especially popular format in online chess for various reasons. For one, the speed of bullet chess makes it harder for opponents to cheat using chess engines. In addition, online bullet chess lacks the typical practical issues normally associated with live bullet chess, particularly players accidentally knocking over the pieces.

Under USCF rules bullet games are not rateable, referring to any time control below five minutes.

A general term for extremely fast chess. It can also refer to games with a fixed time (e.g. ten seconds) for each move. This also can be used for one-minute games.

A game guaranteed to produce a result, because Black has draw odds (that is, for Black, a draw is equal to a victory). To compensate, White has more time on the clock. Common times are six minutes for White and five for Black, or five minutes for White and four for Black. This can also be played with a small increment. This is also known as "time odds" and it is used in various tie breaks for quick tournaments. An example of the Armageddon was played by Ian Nepomniachtchi vs Hikaru Nakamura at the FIDE 2015 Championship.

Before the advent of digital clocks, five minutes per side was the standard for blitz or speed chess. Before the introduction of chess clocks in the mid-1950s chess club "rapid transit" tournaments had a referee who every ten seconds called out.

In 1988 Walter Browne formed the World Blitz Chess Association and its magazine Blitz Chess, which folded in 2003.

In some chess tournaments and matches, the final standings of the contestants may be resolved by a series of games with ever shortening control times as tie breaks. In this case, two games may be played with each time control, as playing with black or white pieces is not equally liked among players. The short time controls in fast chess reduce the amount of time available to consider each move, and may result in a frantic game, especially as time runs out. A player whose time runs out automatically loses, unless the opposing player has insufficient material to checkmate, in which case the game is a draw. "Losing on time" is possible at even the longer, traditional time controls, but is more common in blitz and rapid versions.

The play will be governed by the FIDE Laws of Chess, except when they are overridden by the specific tournament. A common rule used in fast chess tournaments is that if a player makes an illegal move, the player's opponent may point it out and claim a win. For example, if a player leaves his or her king in check, the other player may claim the win. This rule can be left out for a friendly game or left in for what some consider to be a more exciting and fun game. However, in case of a dispute during a tournament, either player may stop the clock and call the arbiter to make a final and binding judgment.

Chess boxing uses a fast version for the chess component of this sport.

As of March 2013, the USCF has also added a separate blitz rating class, for any time control between 5 and 10 minutes. 5 minutes can also mean game 3+2, or three minutes with a two-second increment.

By 1971 the Russian and Moscow five-minute championships had been going several years with Tal, Bronstein and Petrosian all having success. That year Fischer played in a blitz tournament organised by the Manhattan Chess Club scoring 21½/22. The first unofficial "Speed Chess Championship of the World" (or World Blitz Championship) was held in Herceg Novi on 8 April 1970. This was shortly after the first USSR versus the rest of the world match (in Belgrade), in which ten of these players also competed. Eleven Grandmasters and one International Master played a double round-robin tournament. Bobby Fischer won first place, with a score of 19 points out of a possible 22. Fischer scored seventeen wins, four draws, and one loss (to Korchnoi). Mikhail Tal was a distant second, 4½ points behind. Fischer won both games against each of Tal, Tigran Petrosian, and Vasily Smyslov; all of them being past World Champions.

There were also strong tournaments in Bugojno (1978) won by Karpov, and Nikšić (1983) won by Kasparov.

In 2000 Anand won the "Plus GSM World Blitz Chess Cup", which has been sometimes referred to as a Championship, but there is no contemporary acknowledgement of this title. Moreover, the History given at the official 2008 website has referred to the 2008 Championship as the 4th, with Tal (1988), Grischuk (2006), and Ivanchuk (2007) given as predecessors.

In 2009 and 2010 there was an event called the "World Blitz Championship" held after the Tal Memorial in Moscow in November. There is no record of this event in the FIDE Calendar for 2009, when it was won by Magnus Carlsen. However, the minutes of the October 2009 FIDE Congress discussed whether it should be a "proper" Championship (given the qualification scheme), and left the decision to the corresponding internal Commission. For 2010, it was organized in conjunction with FIDE from the beginning. However, in neither case was an arbiter's report presented to the next FIDE Congress or General Assembly, as would be expected for a World Championship and indeed occurred previously with the 2008 Blitz Championship. The 2012 Arbiter's report refers to "7th" blitz championship thus seeming to imply that 2009 and 2010 events were indeed Championships, though this report can be faulted for referring to the "1st" rapid championship (2012) which at the very least forgets Anand's (official) rapid championship in 2003. The balance of the evidence favors these Blitz Championships being counted as official.

In 2011 there was no official blitz championship held, but FIDE was involved with the Sport Accord Mind Games blitz won by Maxime Vachier-Lagrave, with Hou Yifan winning the women's division.

In 1987, Garry Kasparov (the World Champion of classical chess at the time) and Nigel Short played a 6-game exhibition Rapid match ("Speed Chess Challenge") at the London Hippodrome, won by Kasparov 4-2.

The 2001 victory by Kasparov in the FIDE World Cup of Rapid Chess (organized by the French Chess Federation in Cannes) was held contemporaneously to the Melody Amber rapids (thus splitting the top players between the two events), and is sometimes considered to be official, but it was never named as a "championship" but rather a "world cup".

The yearly Frankfurt/Mainz events hosted by Chess Tigers (2001-2010) often had something called a "Rapid" championship, sometimes billing this as a world championship. In its last two years for instance, in 2009 Levon Aronian won the "Grenkeleasing World Rapid Chess Championship" in Mainz, and similarly in 2010, the "Open GRENKE Rapid World Championship" was won by Gata Kamsky. However, these are not official titles. The Association of Chess Professionals (ACP) also held a World Rapid Cup in some of these years, and the annual tournament in Melody Amber also had a rapid segment. There was also occasionally a Eurotel Trophy or Intel Grand Prix event, each of which would be of high stature.

The 1988 victory by Karpov in Mazatlan was officially called the "World Active Championship", but FIDE changed the word 'active' to 'rapid' soon after.

Note: In 2015, Magnus Carlsen received the privilege of playing at a dedicated Board 1 the whole time, not having to move while others did. The given reason was that Norwegian television was sponsoring the event, and moving the heavy cameras around would be too much hassle. After his first round draw, he should not have been on Board 1 until Round 8 when he caught the leaders. Carlsen himself later called this "weird" that board one would be reserved for him.