Kō shōgi (廣将棋 or 廣象棋 'broad chess') is a large-board variant of shogi, or Japanese chess. The game dates back to the turn of the 18th century and is based on xiangqi and go as well as shogi. Credit for its invention has been given to Confucian scholar Ogyū Sorai.

Unlike standard shogi, pieces may not be dropped back into play after being captured. Promotion rules are complex, and the fates of several pieces are interdependent.

The objective is to capture the opponent's commanding pieces: The general, plus, if present, the governor; otherwise, the banner or middle army.

Two players, Black and White, play on a go board ruled into a grid of 19 ranks (rows) by 19 files (columns) with a total of 361 intersections.

Each player has a set of 90 pieces of 34 different types. The pieces are round and flattened like go stones. In all, the players must remember 65 different moves. The pieces are generally of the same size, though black pieces may be slightly larger than white pieces.

Each piece has its name in the form of one or two Japanese characters marked on its face, in white on black stones and in black on white stones. On the reverse side of most pieces are other characters in red; this side is turned up to indicate that the piece has been promoted during play.

Listed below are the pieces of the game and, if they promote, which pieces they promote to. *Pieces marked with asterisks are not found at setup, and only appear with promotion. Many of the translations into English are suggestions only. 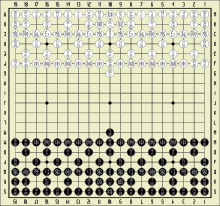 Below is a diagram showing the setup of one player's pieces. The pieces are placed on the intersecting lines of the board and not in the squares. The way one player sees their own pieces is the same way the opposing player will see their own pieces.

Many pieces are capable of several kinds of movement, with the type of movement usually depending on the direction in which they move. The most common kinds of moves are step, range, shoot, and jump.

Some pieces can move only one intersection at a time. (If a friendly piece, and sometimes an enemy piece, occupies an adjacent intersection, the moving piece may not move in that direction. Unlike in Go, 'adjacent' means any of eight intersections.)

Some pieces can move along a limited number of free intersections along a straight line. Other than the limited distance, they move like range pieces (see below).

The limited range pieces at the beginning of the game are the chariot and the vanguard.

Several pieces can jump, that is, they can pass over an intervening piece, whether friend or foe.

At the beginning of the game these are the clerk, staff officer, highway, spiritual monk, and cavalryman.

Many pieces can move any number of free intersections along a straight line, limited by the edge of the board. If an opponent's piece intervenes, it may be captured by moving to that intersection, and removing it from the board. A range piece must stop where it captures, and cannot bypass a piece in its way. If a friendly piece intervenes, the moving piece is limited to a distance that stops short of the intervening piece; if the friendly piece is adjacent, it cannot move in that direction at all.

The range pieces at the beginning of the game are the advance guard, millenary, quartermaster, centuria, rear guard, elephant, patrol unit, shield unit, and chariot unit.

Some pieces can shoot, that is, they can remove a piece from the board a limited distance from their location. Except for the cannon, they cannot shoot an enemy piece if another piece stands between the shooter and its target. The cannon, however, can shoot over such intervening pieces.

It is not clear if a piece must move in order to shoot.

Wherever a burning piece arrives at an intersection, all adjacent enemy pieces are removed from the board, as described below.

The only burning piece is the poison flame, which only appears with promotion.

The sumo wrestler and cavalry have double-move with double-capture abilities, similar to the 'lion move' in chu shogi. Unlike the lion, they are merely double-move pieces and do not have the ability to bypass a friendly piece occupying the first landing point. Unless stated otherwise below, the multiple moves do not need to be in the same direction and need not all be taken. A second or later move may return a piece to its starting location.

The European cannon has a double-kill ability when it shoots.

In the diagrams below, the different types of moves are coded by symbol and by color: Blue for step moves, green for multiple capture, red for range moves, and yellow for jumps.

Pieces are arranged in this section so that, if they promote, the promoted version is to the right. Piece names with a grey background are present at the start of the game; those with a blue background only appear with promotion. Abbreviations of Kanji names are not official, but for the sake of Layout. Betza's funny notation has been included in brackets for easier reference, with the extension that the letter d indicates doublemove pieces, dh indicates limited doublemove pieces (doublemove pieces that must continue on the same path they started on, moving either forwards or backwards) and dd indicates doublemove pieces that must stop once they capture. dn represents pieces that may move n times per turn, dhn indicates limited n-move pieces, and ddn indicates single-capture n-move pieces. x (for shooting, the equivalent of igui in Western chess variants) denotes igui power without the power to move to the igui squares, and xn denotes the ability to perform igui (shoot) n times per turn. pp indicates cannon-like pieces that can jump an unlimited number of pieces, and pn indicates cannon-like pieces that can only jump n pieces.

Ko shogi has the most complex promotion rules of any shogi variant.

A player's promotion zone is the enemy camp, consisting of the six farthest ranks that comprise the opponent's territory at setup (the original line of the opponent's chariots and beyond). If a piece moves within this promotion zone, including moves into, out of, or wholly within the zone, then that player may promote the piece at the end of the turn. (The general, sumo wrestler, and elephant do not promote, nor do pieces which have already promoted.) Promotion has the effect of changing how a piece moves. See the table above for what each piece promotes to. Promotion is effected by turning the piece over, revealing the name of its promoted rank.

However, there are other ways of promoting than entering the enemy camp:

There are other circumstances that may prevent or revert promotion:

Many pieces only appear as a result of promotion. They are marked with a blue background in the movement diagrams above.

Unlike Western chess, a player need not move out of check, and indeed may even move into check. Although obviously not often a good idea, a player with more than one commanding piece (general or governor) may occasionally sacrifice one of these pieces as part of a gambit.

A player is not allowed to give perpetual check to the sole objective piece.

In practice the final capture rarely happens, as a player will resign when checkmated, as otherwise when loss is inevitable.

Another possible, if rather uncommon, way for a game to end is repetition (sennichite). If the same position occurs four times with the same player to play, then the game is no contest. Recall, however, the prohibition against perpetual check.

The method used in English-language texts to express shogi moves was established by George Hodges in 1976. It is derived from the algebraic notation used for chess, but differs in several respects. Modifications have been made for kō shogi.

A typical example is P-8h. The first letter represents the piece moved (see above). Promoted pieces have a + added in front of the letter. (e.g., +MA for a governor (promoted middle troop). The designation of the piece is followed by a symbol indicating the type of move: - for an ordinary move or x for a capture. Next is the designation for the intersection on which the piece lands. This consists of a number representing the file and a lowercase letter representing the rank, with 1a being the top right corner (as seen from Black's point of view) and 19s being the bottom left corner. (This method of designating intersections is based on Japanese convention, which, however, uses Japanese numerals instead of letters. For example, the intersection 2c is denoted by 2三 in Japanese.)

If a piece captures by 'igui’ (possibilities are the sumo wrestler, dragon ascending, tiger wing, cavalry, winged horse, twelve-mile fog, immaculate light, banner and drums, or master at arms), the intersection of the piece being captured is used instead of the destination intersection, and it is preceded by the symbol '!'. If a second or later capture is made, then it is added after the preceding capture.

If a move entitles the player to promote the piece, then a + is added to the end to signify that the promotion was taken, or an = to indicate that it was declined. For example, MAx7c= indicates a middle troop capturing on 7c without promoting.

In cases where the above notation would be ambiguous as to which piece is meant, the designation of the starting intersection is added after the designation for the piece.

Moves are commonly numbered as in chess.