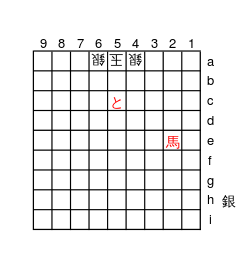 Tsumeshogi (詰将棋 or 詰め将棋 tsumeshōgi) or tsume is the Japanese term for a shogi problem in which the goal is to checkmate the opponent's King. Tsume problems present a situation that might occur in a shogi game, and the solver must find out how to achieve checkmate. It is similar to a chess problem.

Tsume problems can be used to fulfill one of two tasks: to train in shogi strategy or to be created as a work of art.

Tsume problems are considered very good training for playing shogi. They teach not only how to effectively checkmate the king but also to predict moves and plan out a long series of moves before achieving a goal. There are many websites and books dedicated to tsume problems for this purpose.

As a work of art

Many shogi players for centuries have created tsume problems with long and deliberate mating lines as artwork. They might consist of the pieces making geometric shapes, a theme which is used throughout the problem, the removal of all pieces on the board (called a Smoke Mate), or a set number of moves. One of the most famous tsume artists is Kanju Itou, who wrote in 1755 Shogi Zukou (将棋図巧), a famous collection of artistic tsume problems. The main tsume shogi prize in shogi world is "Kanju Prize".